The Beverly Hills City Council is calling for “all civilized people across the globe” to boycott short-term rental website Airbnb unless the company reverses its decision to remove listings in Israeli settlements in the West Bank. 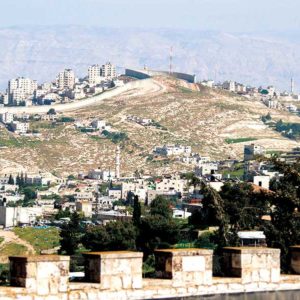 Israeli settlements on the West Bank, such as the ones pictured, have been a contentious issue in the longstanding Israeli-Palestinian conflict. (photo courtesy of the office of the chairman of the Joint Chiefs of Staff)

The resolution, unanimously approved last week, said Airbnb’s decision “demonstrates hatred, prejudice, ignorance and hypocrisy,” and is “antithetical to the values that we hold dear in Beverly Hills.”

“We find the actions of Airbnb deplorable,” Mayor Julian Gold said in a statement. “On behalf of our residents, this unanimous resolution reflects the City Council’s ongoing commitment to Israel and to exposing hatred anywhere it exists.”

Critics of Airbnb’s decision are saying the company is taking an unfair stand against Israel in the country’s longstanding conflict with Palestine by singling out a predominantly Jewish area for its ban.

“Airbnb is not welcome in Beverly Hills as long as its policies are based on anti-Jewish double standards,” Vice Mayor John Mirisch said in a statement. “Jew hatred is a disease. We can try to inoculate others against this malady but we also must protect ourselves against its effects.”

The Simon Wiesenthal Center, a global human rights organization with a focus on anti-Semitism, headquartered just south of Beverly Hills on Roxbury Drive, also called for a boycott.

“We don’t expect Airbnb to be geopolitical experts, but today’s draconian and unjust move, which only empowers extremists and terrorists, merits only one response – taking our community’s business elsewhere,” Rabbis Marvin Hier and Abraham Cooper said in a statement on Nov. 19, the day Airbnb announced its new policy.

A statement from Airbnb mentioned “conflicting views” on whether businesses should operate in the disputed territory on the West Bank. Despite the outrage in the U.S., much of the global community views the settlements differently. In December 2016, for example, 14 countries in the United Nations’ Security Council approved a resolution condemning Israeli settlements in the disputed territories as “a major obstacle to the vision of two states living side-by-side in peace and security.” Then-President Barack Obama sparked widespread fury by the Jewish community in the U.S. by abstaining from the vote instead of using his veto power, a privilege that the U.S., China, France, Russia and the U.K. can use on any substantive resolution that comes before the Security Council.

Airbnb is allowed to operate in the West Bank under U.S. law, but the company has adopted new criteria that it will use to determine whether to have listings in disputed or occupied territories around the world. They include consulting “a range of experts,” assessing “any potential safety risks for our hosts and guests” and evaluating “whether the existence of listings in contributing to existing human suffering.”

“We know that people will disagree with this decision and appreciate their perspective,” the statement read. “This is a controversial issue. There are many strong views as it relates to lands that have been the subject of historic and intense disputes between Israelis and Palestinians in the West Bank. Airbnb has deep respect for those views. Our hope is that someday sooner rather than later, a framework is put in place where the entire global community is aligned so there will be a resolution to this historic conflict and a clear path forward for everybody to follow. As of today, this is an aspirational hope. People of goodwill have been seeking this goal for decades but we continue to hope for a durable, lasting peace.”

Airbnb’s global head of policy and communications, Chris Lehane, added that “this is a hard and complicated issue and we appreciate everyone’s perspective.”