Jews fleeing discrimination and seeking the comfort of shared culture and religion flocked to the Fairfax District starting in the 1920s. Nearly a century later, the area remains the center of Los Angeles’ Jewish community. 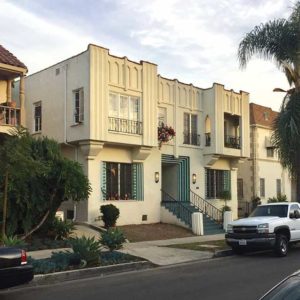 A range of architectural styles can be found in Beverly Fairfax, including Chateauesque, Streamlined Moderne and Art Deco (above). The area has long served as a center for Los Angeles’ Jewish residents. (photo courtesy of Dale Kendall)

As a result of that long history, the National Register of Historic Places has recognized the Beverly Fairfax neighborhood, for its significance to the city’s Jewish residents and for the area’s preserved period revival architecture. The residences in the area bounded by Rosewood Avenue and a slim section reaching up to Melrose Avenue on the north, North Gardner Street on the east, North Orange Grove on the west and Beverly Boulevard on the south are now considered worthy of preservation.

“We have to act fast to save our history before we’re missing too much of it,” he added.

The effort to preserve the neighborhood began in 2016 when Kendall, along with five other Beverly Fairfax residents, shared concerns about new developments destroying many of the area’s older two-story, multi-family buildings. The group, as a result, formed Save Beverly Fairfax to protect the area.

Leading the organization with Nora Wyman and Brian Harris, Kendall grew support among residents and property owners for the neighborhood’s preservation through mailings, community meetings and even a lemonade stand. Save Beverly Fairfax also received the support of SurveyLA, the Los Angeles Conservancy, the Los Angeles Museum of the Holocaust, Councilman Paul Koretz, 5th District, and Mid City West Community Council.

“It’s really a special place. The scale of the buildings are pleasing, and the neighborhood is very pedestrian-oriented – it’s designed for walking around,” said Scott Epstein, chair of Mid City West. “It’s really one of the finest multi-family residency areas.”

Save Beverly Fairfax, bolstered by the community’s support, hired Architectural Resources Group to prepare an application to be listed on the National Register of Historic Places. The research into the neighborhood’s history revealed not only the residences’ architectural significance, but more surprisingly, Kendall said, the Jewish community’s struggle with discriminatory housing policies as well.

Threats of violence from the Ku Klux Klan during the 1920s, realtors refusing to show or sell properties to Jewish people, and redlining, or disinvesting in traditional Jewish neighborhoods were just a few of the ways that the demographic’s movement was controlled in Los Angeles. Beverly Fairfax, along with the greater Fairfax District, however, offered a safe haven for the city’s Jewish residents with fewer impediments on home ownership, according to the neighborhood’s historic status application. Following World War II, the area’s Jewish population grew as many Holocaust survivors found the established community attractive.

“I grew up in the area, and I didn’t realize how significant the neighborhood was,” Kendall said. “I never realized that in Los Angeles we had such racism.”

“It was really a grassroots effort,” Kendall said.

With the new historic status, Beverly Fairfax residents and property owners must review any major exterior changes they plan to make to their homes with the Los Angeles Office of Historic Resources. Interior work, as well exterior painting, does not need to be reviewed.

L.A. Conservancy Director of Advocacy Adrian Scott Fine hopes that the historic status of Beverly Fairfax will better highlight the struggles Los Angeles’ Jewish residents faced for much of the city’s history. He said he had been unaware of the extent of discriminatory policies toward the community until he became involved with Beverly Fairfax’s nomination process.

“Beverly Fairfax tells an important part of L.A.’s story,” he said. “The status raises the profile of the neighborhood, and hopefully it helps people to understand the importance of the area, so that history doesn’t get chipped away.”