In honor of the 40th anniversary of the assassination of LGBTQ-rights champion Harvey Milk on Nov. 27, artist Khoi Nguyen (left) presents his traveling tribute to Milk – a portrait of the San Francisco supervisor made up from over 43,000 fingerprints, including those of Los Angeles Police Department Assistant Chief Beatrice Girmala (center, left); Councilman Mitch O’Farrell, 13th District; and Hollywood Museum founder and President Donelle Dadigan (right). 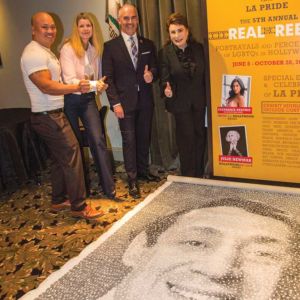 Almost complete, the image contains the fingerprints of Milk’s colleagues in San Francisco, Los Angeles, New York and D.C., as well as numerous other participants, from celebrities to the homeless. With a PhD in mathematics, Nguyen has linked the portrait to an interactive video that can display the name of each participant, the location of each fingerprint and participant interviews.

The work continues to travel across the country as it gathers additional prints. The Hollywood Museum, 1660 N. Highland Ave., will potentially exhibit the portrait in its annual LGBT Exhibit, although the dates have yet to be decided.