A 32-year-old man was charged on Nov. 27 for allegedly attempting to run over two members of a synagogue with his car last Friday on La Brea Avenue in what authorities classified a hate crime. 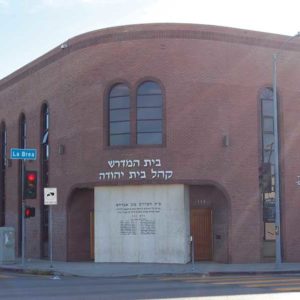 A suspect allegedly attempted to run over two men outside a synagogue on La Brea Avenue on Nov. 27. (photo by Edwin Folven)

Mohamed Abdi Mohamed faces two felony counts of assault with a deadly weapon, as well as a special circumstances allegation of committing a hate crime. He pleaded not guilty on Nov. 27 and remains in custody in lieu of $500,000 bail.

Mohamed was allegedly driving on La Brea Avenue near Oakwood Avenue at approximately 9:30 p.m. on Nov. 23 when he shouted anti-Semitic slurs at two Jewish congregants who had gathered outside the Bais Yehuda temple near the intersection. Mohamed then allegedly drove his car toward the two men, who fled in different directions and were not struck.

The defendant allegedly made a U-turn and again drove toward the victims. Seconds later he crashed into another vehicle. Bystanders called 911 and police arrived minutes later and arrested Mohamed, who remained at the scene. No one was injured.

Los Angeles Police Chief Michel Moore said the victims did the right thing by taking quick action to get away from Mohamed. The LAPD is investigating the case with the FBI. A motive has not been established.

“What I want to draw a particular focus on is just four weeks after the terrible attacks in in Pittsburgh, we see this action outside a synagogue here in Los Angeles, where a congregation leaving, outside … were suddenly and viciously attacked,” Moore said. “As they walked away from other congregants, their attention was drawn to an individual who was acting suspiciously. They started monitoring that suspect, that individual’s actions and his car, and that monitoring and vigilance is what saved their lives. I am grateful that we have Angelenos of all faiths and walks, who recognize the threats are out there [and they] are real, that they can strike at any point in time, and they take actions on their own … to ensure that their safety is something that can be pursued at every opportunity.” 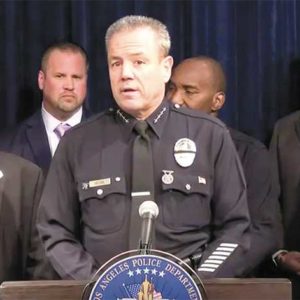 LAPD Chief Michel Moore warned that hate crimes are increasing nationwide and cautioned the public to remain vigilant. (photo courtesy of the LAPD)

Deputy Chief Horace Frank said the victims, who are 37 and 57 years old, first saw the suspect as he was driving south on La Brea Avenue near Oakwood Avenue. The hate crime allegations stem from the racial slurs Mohamed allegedly used specifically targeting Jews.

Mohamed is a U.S. citizen who emigrated from Mogadishu, Somalia, in the 1990s and most recently lived in Seattle. Mohamed rented a car and traveled to Los Angeles last Friday. Local and federal authorities are piecing together his whereabouts leading up to the attack as part of the investigation.

Authorities believe Mohamed is acted alone. He was not intoxicated when arrested. Investigators said a knife was found inside Mohamed’s vehicle.

Frank said the investigation will take a long time and there is not timeline for its completion. The attack was denounced by local government leaders.

“I want to make it clear to the Jewish community and all residents of Los Angeles that this type of hate violence will not stand,” said Councilman Paul Koretz, 5th District. “My colleagues and I will do everything in our power to make sure our communities are protected and secure.”

“The facts surrounding last week’s incident are still being investigated, but the profoundly disturbing increase in hate crimes across our nation must be wake-up call for all Americans,” added Los Angeles City Attorney Mike Feuer. “Here at home, Angelenos have got to reject any attack on our neighbors, especially if it’s based on religion, race or sexual orientation. If ever there was a time to strive together for greater respect, understanding and acceptance, that time is now.”

Police have increased patrols around synagogues and other religious sites in the wake of the attack. Mohamed faces a possible maximum sentence of eight years and eight months in state prison if convicted. He is scheduled to return to court on Dec. 10.

“Hate in America is on the rise. That has to change,” Moore added. “A portion of that is that every community recognize when such acts occur that the department, the LAPD and its federal and state partners, will bring the full weight of the law to hold accountable those who believe there will be some other type of response.”