A bridge to housing opening in Hollywood

Work began on Nov. 15 at a former library in Hollywood that is being converted into a permanent bridge housing shelter for homeless women. 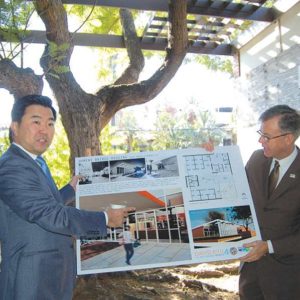 Councilman David Ryu (left) joined City Engineer Gary Lee Moore on a patio that will be preserved in the new bridge housing shelter for homeless women on Gardner Street. (photo by Edwin Folven)

Advocates and representatives of the Los Angeles Homeless Services Authority praised the shelter for increasing options to house women, who are some of the most vulnerable people living on the streets. The shelter will be located at the former Will and Ariel Durant branch library at 1403 N. Gardner St. – a facility that has been closed for nearly two decades after a new library opened a couple blocks away on Sunset Boulevard.

“We are turning a new page in the story of homelessness in Hollywood and Council District 4,” said Councilman David Ryu, who is spearheading the project. “I am proud to work with the city, county and community on turning this former library into a home, and into a beacon hope for women facing homelessness.”

The shelter, which is expected to open late next summer, will have 30 beds for women located in the approximately 4,000-square-foot building. The shelter will offer a laundry facility and spaces for social service providers to provide counseling, job training and other resources aimed at getting the women permanently off the streets.

The approximately $1.8 million project is being funded by Measure HHH, a ballot initiative approved in 2016 for homeless housing projects.

“Women and women-led families are some of the most vulnerable and fastest growing subsets of the homeless population,” said Sarah Dusseault, vice chair of the Los Angeles Homeless Services Authority. “Thanks to L.A. voters and unprecedented collaboration across the county, we have resources and a plan that’s working to address the homelessness crisis. As a community, we must continue supporting projects like this to help our neighbors build a more secure and stable future and reduce homelessness in our region.”

Many neighbors near the former library building, located just south of Sunset Boulevard, said they are supportive of the new shelter. The facility will be staffed full-time with 24-hour security and is not anticipated to have an adverse impact on the surrounding area.

“It’s contingent upon every community to be part of the solution,” said JoAnn Koplin, a resident who lives nearby on Sierra Bonita Avenue. “Homelessness is an urban problem that affects every community in our city. I support [the shelter] 100 percent.”

Ann McCall, who was formerly homeless in 2012 in downtown Los Angeles but has since found an apartment in Koreatown, said few beds are specifically available for women in homeless shelters throughout the city. She advocates for improved facilities such as the Gardner Street shelter and said she wished such a shelter was available when she was homeless.

“I had a lot of issues, a family death, always taking care of everyone else. I had a complete mental and emotional breakdown and found myself spiraling out of control,” McCall said. “If you think it can’t happen to you, don’t think it can’t. It took me a year to find a job and get back on my feet. For women to be able to come to this shelter will be key. They can get the help they need and find resources that will help them get to where they need go, and then new women can come in.”

City engineer Gary Moore said portions of the building will be preserved including the outer walls and and front courtyard, where a large tree will provide a shady respite for residents. Wood from the bookshelves will also be repurposed for use inside the shelter.

The library was built in 1958 and designed by the firm Honnold and Rex. It has been shrouded with a fence and closed to the public for years.

“We are keeping the historic nature of the building … but doing some upgrades,” Moore added. “We are making it fully ADA accessible, creating a kitchenette area and space for a case manager.”

City officials said they hope the new shelter will be a model for others. During the groundbreaking ceremony on Nov. 15, Ryu, Moore and others wrote messages to the women who will stay there on a sign reading “Welcome Home.”

“I am so glad to see this day finally came,” Ryu added. “We are turning the page on homelessness in Hollywood and in the 4th Council District.”