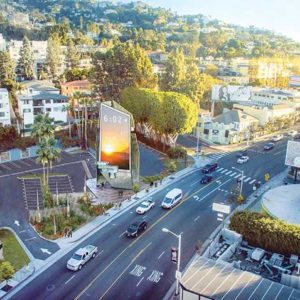 The Sunset Spectacular billboard tower will stand 64 feet high and display arts programming by the Museum of Contemporary Art, in addition to digital advertising, on its three petal-like facades. (rendering courtesy of the city of West Hollywood)

In a 3-2 decision on Nov. 5, the City Council approved the final design by developer Orange Barrel Media, which will feature a public plaza and digital advertising and arts programming by the Museum of Contemporary Art on three towering petal-like facades. Mayor Pro Tempore John D’Amico and council members Lindsey Horvath and John Heilman voted in favor of the project. The approval, however, also stipulated that the 67-foot tower – which had already been downsized from 72 feet – be scaled down by an additional three feet.

As a result, the tower will be the smallest vertical billboard on the Strip, according to the project’s architect, Tom Wiscombe.

The final design has the plaza surrounding the tower at 2,113 square feet, a 43 percent reduction in size from the original proposal. It also includes more green space in the plaza with grass patches between pavers.

“You can actually pass through it, it’s a flex space, the city can plan events there or it can just be a space to chill out and walk your dog,” Wiscombe said.

Additionally, while the initial design would have removed five of the parking stalls in an adjacent, city-owned parking lot, the final plan keeps all the spaces in place.

As Heilman and Horvath gave their approval for the billboard project, both emphasized that the Sunset Spectacular is a new way of exploring the city’s future with advertising, which brings uncertainties.

“This was always designed to be an opportunity for us to look at creativity with respect to billboards, look at ways that we could generate more revenue from the billboards on that site, and it really is designed as an experiment. And we’re all taking a big leap of faith,” Heilman said. “We’re going to have to answer for it if it doesn’t turn out to be successful.”

Horvath added that the project will help inform city policies for other digital billboards.

“I think that this is a risk worth taking. I think this an opportunity for us to do something unique and creative,” Horvath said. “And I think the Sunset Strip is the exact place to be doing it.”

Mayor John Duran opposed the project’s final design, stating he preferred the original plan because the downsizing “made the Sunset Spectacular less spectacular,” along with Councilwoman Lauren Meister, who dismissed the idea that the tower was an innovative art installation.

“Art is in the eyes of the beholder, and this is still a digital billboard,” Meister said. “I think the plaza looks great, and it just makes me think there’s so many other things that we could be doing with our public space there and the parking lot area. But to be honest, I don’t see this as something I would like to see on Sunset Boulevard, so I can’t support this project.”

Nancy Dushkin, a West Hollywood resident who lives on Shoreham Drive just north of the belltower project site, asked the council to reconsider approving the project.

“I come here truly believing that you all care about the residents of West Hollywood and that you care about the property owners,” Dushkin said. “Despite the objections from the residents that are directly affected, not the ones who live up the hill, but those of us that have units and buildings that directly face down into this electronic billboard – I think it’s the electronics that bother us more than just about anything – you’re determined to move forward anyways. The result of this is that in my building alone, we have 15 units, two have already sold, and I’m talking about in the recent last few months, three are listed, two more want to sell … it’s already degrading our property value.”

Nearly all of the other public comments made at the Monday meeting, however, were in favor of the Sunset Spectacular, with community members calling it “thrilling” and “a subtle reminder that this city is thriving.”

“We need to revitalize the Sunset Strip. I remember as a teenager going to Gazzari’s and having the best time of my life and seeing Guns N’ Roses for the first time, and it was a great time,” Dominic Bonanno said. “Somewhere along the way, the Sunset Strip just lost its luster I guess, and I think that something like this [project] is going to be great … West Hollywood needs to be a beacon.”

Resident Traci Tarver praised the MOCA art aspect of the belltower project and emphasized the space would also benefit the city’s economy.

The developers will now begin filing for construction permits. According to West Hollywood Long Range Planning Manager Bianca Siegl, construction on the Sunset Spectacular could begin as early as next fall.