Civic leaders and Jewish community members called for solidarity and healing in the aftermath of a mass shooting on Oct. 27 at the Tree of Life synagogue in Pittsburgh that left 11 people dead. 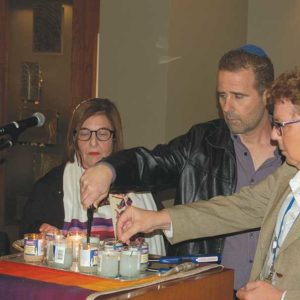 “Our entire country has been affected by this needless moment, and it is incumbent on us … to think about the ways in which we talk to one another, and the ways we learn to listen better to one another, to remember our empathy for our neighbor, so that we can love our neighbor as ourselves,” said Rabbi Denise Eger, of Congregation Kol Ami. “The truth is, in many ways, anti-Semitism is often a canary in a coal mine. It’s our job that wherever hatred roots, we have to stop it, whether it’s hatred for the LGBTQ community, whether it’s racism, bigotry of any sort, anti-Semitism, we must name it, we must call it out, we must never abide it.”

Eger’s viewpoints echoed those expressed by Los Angeles City Attorney Mike Feuer earlier on Oct. 30 at a meeting with reporters, during which he called for unity among divergent groups. Feuer said his office vigorously prosecutes hate crimes and is involved with outreach efforts in the Muslim community and with other groups that are targets of racism and hate. He recounted an incident years ago while he was away in law school when a cross was burned in the yard of his family’s home in San Bernardino after his younger brother wrote an editorial in his high school newspaper denouncing efforts by the Ku Klux Klan to recruit members in that area. He added that rhetoric by President Donald Trump and members of his administration is dividing the country in dangerous ways, and called for a return to civility and for everyone’s viewpoints to be considered and valued. Feuer also chided members of Congress for not holding hearings that could bring about measures to prevent gun violence.

“I don’t see how another moment can pass in our nation without addressing that lethal combination of hate and guns that we saw assault a congregation that was simply trying to worship in peace in Pittsburgh,” Feuer said. “Elected officials hold key responsibilities, both when it comes to the issue of hate and the issue of gun violence. On the issue of hate, it is long past time that officials from both parties transcend partisanship and call hate what it is, and call out those very explicitly, who would align themselves with both the haters and the vocabulary they invoke.” 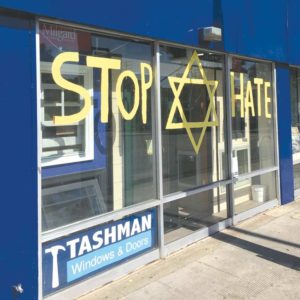 Kenny Tashman, owner of Tashman Home Center in West Hollywood, expressed his feelings after the mass shooting in Pittsburgh with a message on the front windows of his store. (photo by Kenny Tashman)

Regardless of who emerges victorious in the Nov. 6 election, Feuer said there needs to be empathy for others and their viewpoints from the top down, as opposed to the attacks and marginalization that has polarized people under the current political situation.

Feuer placed some of the blame squarely on Trump, who he said continuously fuels divisiveness and cited the 2017 rally in Charlottesville as a prime example.

“One will never be able to draw a straight line between any rally or any particular comment by the president and an event like [the Pittsburgh synagogue murders], but there is no question when you say proudly, ‘yes, I’m a nationalist,” when you say that people who were chanting ‘Jews will not replace us’ included a number of good people in that crowd, when you consistently wield division as a weapon, when you invoke vocabulary that is a dog whistle to some of the worst possible actors in American society, when you take those steps, there are consequences, particularly when you are the president of the United States,” Feuer said. “Separate from electoral politics, separate from who wins or loses an election, the shootings in Kentucky, the pipe bombs that were mailed, the tone of rhetoric on the internet, the racism, the anti-Semitism, the misogyny, the homophobia, all of it needs to be addressed in clear, resonate, unequivocal ways for the good of the country in the short term, but in particular, the long term.”

Many other officials on the national and local levels also denounced the mass shooting at the Tree of Life Synagogue in Pittsburgh.

“Many of the generations of immigrants who have come to this country and helped build it were inspired by the idea that it was a land of opportunity, for all those brave enough to make the passage, of every religion, creed and color,” U.S. Rep. Adam Schiff said. “That very idea of America is being challenged by those who preach hatred, who stoke division and accentuate our differences, not our common humanity. We must overcome these new purveyors of hate. And we shall.”

Beverly Hills Mayor Julian Gold, who was traveling this week, sent a letter of support to Pittsburgh government and Jewish officials following the synagogue massacre.

“It is hard to comprehend the disbelief, pain and sorrow your congregation and your citizens are experiencing after such a horrific act of violence, especially in a sacred house of prayer,” the letter read. “I know there are no words which can ease the pain or help us understand why this senseless act of hate occurred. We can only grieve for the victims as we honor their lives and as we try to console their families. I pray that one day, we may be free of the hatred which fuels this violence.”

“The events of the past week have been so difficult for so many of us,” Duran said. “The hate crime killings of two African American men in Kentucky … and of course with the shooting at the Tree of Life Synagogue, I think many people, including myself, are wondering what is happing in our country and how do we navigate our way out of this.”

Koretz also denounced hate and called for stronger gun control measures that could prevent murders such as those in Pittsburgh.

“Part of the tragedy is that we as a country have been validating white supremacists, racists and anti-Semites. The current administration has given passive support to the neo Nazis and white nationalists without shame, even in the wake of Charlottesville. So just when we thought approved hate and anti-Semitism were relics of the past or works of fiction, they are happening right now,” Koretz said. “I want to remind all of us that each person is responsible to remember and stand up against inhumanity.”

The victims of the Pittsburgh tragedy were also remembered in other local synagogues, including Wilshire Boulevard Temple, which sent a message to congregants.

sisters in Pittsburgh and against hate and anti-Semitism remain steadfast, as does our commitment to your family’s safety,” the correspondence read.

Kenny Tashman, owner of Tashman Home Center in West Hollywood, painted “Stop Hate” in large letters on the front windows of his Santa Monica Boulevard store, along with a Star of David. Tashman, who attended his nephew’s college graduation in Pittsburgh in May, said the murders brought back memories of how his family suffered at the hands of the Nazis during the Holocaust. He offered to provide free paint and a brush to anyone who wants to create a similar public message.

“It was tragic, of course, and it can happen anywhere,” Tashman said. “My reaction was this has to stop. America is a great country and we don’t want this here. People can’t just stand by quietly, because we all know what happens when we remain quiet.”