West Hollywood has adopted a new plan to better coexist with its yipping coyote residents. 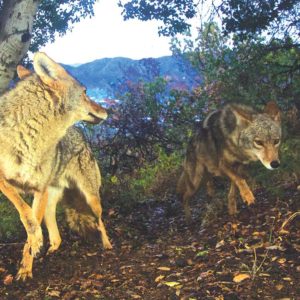 The Coyote Management and Coexistence Plan, approved unanimously by the City Council on Oct. 15, was tailored from a plan originally developed by the Humane Society.

“West Hollywood has a strong background in advocating for animals,” Joshua Schare, the city’s communications manager, said. “The coexistence plan is primarily about creating awareness.”

However, despite its approval, Schare, and Daniel Mick, a city code compliance supervisor, emphasized that the actual issue of coyotes roaming the streets of West Hollywood remains relatively minute. While the city does not officially keep track of coyote sightings or incidents, the officials, who both live in the area, said that they had had only a handful of coyote sightings over the years, and that actual attacks on humans by coyotes in the city are extremely rare.

“I’ve been a part of the city for 12 years,” Mick said. “The coyotes come down to West Hollywood because of our proximity to the Hollywood Hills, but its like once in five years.”

The plan’s details emphasize the importance coyotes serve in ecosystems – even urban ones – by helping control other animal populations, such as rodents, rabbits, deer and Canada geese. Primarily the strategy’s efforts revolve around discouraging coyotes from more permanently settling in the city by removing food attractants, whether that be fruit from trees or pet food on porches. Incident prevention includes educating residents about keeping watch on small pets while they are outside.

The management plan also institutes a community-based hazing strategy, which encourages residents to use “harassing actions without employing weapons or causing bodily harm to the coyote,” according to the plan’s staff report. This method can involve making loud noises, spraying water, shining lights and throwing objects during an encounter with a coyote, and proves more effective than lethal control, which often results in a surge of reproductive rates among coyotes to maintain their population size.

However, in the extreme instance of an unprovoked attack on a human by a coyote, West Hollywood will fund the lethal removal of the animal.

“Hazing really helps to reinforce the fear of humans in coyotes,” Mick said. “Essentially, we’re trying to minimize how attractive the city is for these animals.”

Much of the education and outreach that the plan details will be done via social media, Schare said, although the staff reports also notes that awareness campaigns may be conducted through public trainings and educational materials such as brochures, postcards or websites.

The councilwoman, who last year said that she wanted to avoid turning to pest control experts who would most likely euthanize the coyotes, approved the plan’s emphasis on education and prevention.

“I’m glad to see the city adopt this humane policy that keeps both our residents and animal companions safe, and treats coyotes with care,” Horvath said.

CBS Television City reportedly on the verge of being sold