High-visibility striped crosswalks are being installed at five intersections on Fountain Avenue in West Hollywood to improve pedestrian safety. 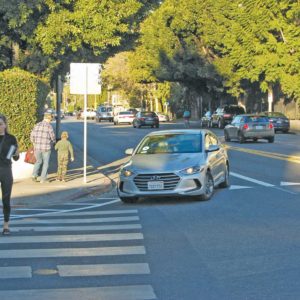 The new crosswalks are at the intersections of Fountain and Formosa, Hayworth and Harper avenues, as well as Detroit Street and Havenhurst Drive. A left turn lane from eastbound Fountain to northbound La Brea Avenue is also being extended to prevent traffic from backing up and blocking other lanes. The crosswalk at Fountain and Formosa avenues was installed last week, and the work at the other intersections is anticipated to be finished by the end of this week.

“There have been a number of complaints over the years from residents about a heavy volume of traffic on Fountain. There have also been a couple fatalities over the years,” West Hollywood City Engineer Hany Demitri said. “The crosswalks will enhance safety not only for pedestrians, but all modes of traffic.”

The crosswalks are the first phase of improvements along Fountain Avenue. Plans call for small lights to be embedded in the pavement at the crosswalks as part of a second phase scheduled to be complete by mid-December.

Permanent lights will flash when pedestrians cross and alert drivers approaching the intersection. A new pedestrian safety measure at Santa Monica and Robertson boulevards will likely be in place by mid-December, in which the lights will be red in all directions for vehicular traffic.

The pedestrian-only phase will only be functional on Thursday, Friday and Saturday nights from 10 p.m. to 2 a.m., when a large number of pedestrians are present in the area. Demitri said studies have shown that vehicle traffic flow will not be slowed significantly.

“We did an external survey in the field at night over a period of several hours at the intersection and realized that the volume of vehicles goes down significantly, and the volume of pedestrians goes up,” Demitri said. “Two-thousand people cross per hour on the four crosswalks at the intersection during those hours. We know it’s going to improve safety without adding any excessive delays.”

The city is awaiting approvals from Los Angeles County before the signal timing can be changed because the county oversees traffic signals in West Hollywood. “Safety is our main concern, our main priority,” he said.

Rent control debate heats up ahead of Election Day