West Hollywood became the latest city in Los Angeles County to endorse Proposition 10, which would restore rent control discretion to local governments if passed by California voters in the Nov. 6 election. 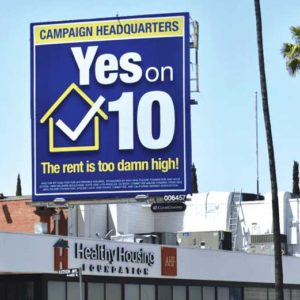 Yes on 10 signs have appeared throughout L.A. (photo courtesy of the AIDS Healthcare Foundation)

The proposition would repeal the Costa-Hawkins Rental Housing Act, which prohibits rent control on units occupied after February 1995. Tenants and local elected officials have blamed Costa-Hawkins for contributing to the housing crisis by displacing tenants who can’t afford large rent increases. But a recent survey shows support for Proposition 10 lagging.

“Prop. 10 is popular but not guaranteed to pass,” West Hollywood Mayor Pro Tempore John D’Amico said. “So if this is something, like us, that you believe should become the law of the land, allowing cities to adopt rent control ordinances if they wish, you should talk not only to your neighbors, but to people you know who live up and down the state of California.”

Forty-eight percent of likely voters would vote against Proposition 10, compared to 36 percent who would vote yes and 16 percent undecided, according to a Public Policy Institute of California survey released last month. Among Democrats, 46 percent are in favor of Proposition 10 and 43 percent are opposed, compared to 52 percent of Republican and independent voters who are against it.

“The yes votes are falling below a majority among both homeowners and renters,” said Mark Baldassare, the institute’s president and CEO.

Regionally, the survey showed that support was at its highest in Los Angeles, at 45 percent, and lowest in the Inland Empire, at 29 percent.

“Fixing the housing crisis requires tools of all kinds, and this is one of them,” D’Amico said. “We shouldn’t let this opportunity pass and I’m guessing everyone in this room agrees or is willing to consider agreeing, but there are plenty of people in plenty of rooms who may not agree.”

Some of the opponents to Proposition 10 have been concerned about its application to single family homes. A report by UC Berkeley Professor Emeritus Ken Rosen listed declining home values as one of the potential effects of rent control on single family homes, should city councils decide to apply it to them if the proposition passes. Detractors also say that the proposition would worsen the housing crisis by disincentivizing new development.

According to the nonpartisan Legislative Analyst’s Office, the effects of Proposition 10 would depend on how expansively local governments choose to add rent control to their communities.

“I just think our city has always been a leader, and we can continue to lead, and one of those ways is to talk to people about voting for this,” D’Amico said.

Last month, the Beverly Hills City Council unanimously endorsed Proposition 10. Council members said they think rent control issues are best decided at the local level. For more than a year, Beverly Hills tenants and landlords have been debating terms for the city’s Rent Stabilization Ordinance, with curbing the displacement of longtime renters one of the priorities. West Hollywood residents have also complained of displacement caused by Costa-Hawkins. The cities of Berkeley, Oakland and Santa Monica have also endorsed Proposition 10. Opponents include several affordable housing groups, veterans advocacy groups and business organizations, including the Beverly Hills/Greater L.A. Association of Realtors, Los Angeles County Business Federation, as well as the Los Angeles Area, Hollywood and Beverly Hills chambers of commerce.

“It’s still a longshot, it’s not polling as strongly as it should be,” West Hollywood City Manager Paul Arevalo said. “This is something that cities and communities need to continue to get the word out.”

New wave Italian cuisine at No. 10