The last straw for polluting plastics 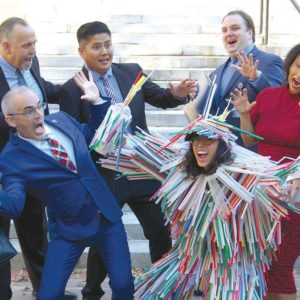 O’Farrell said he wants to take the initiative to the next level, and is working on a collaboration with McDonald’s that would bring the chain on board with the straws only on request initiative. With a motion introduced on Oct. 16 in the council’s Energy, Environment, and Social Justice Committee, he also asked the Bureau of Sanitation to report back within 90 days on the feasibility of phasing out single use plastic straws entirely by 2021.

“Earlier this year, Councilwoman Martinez and I co-introduced a motion to create a citywide ordinance requiring all restaurants and food service providers to distribute plastic straws by request only. The motion also calls for a report by [Department of] Sanitation on options business owners may use as a single-use plastic straw alternative, such as straws that biodegrade or are recyclable,” O’Farrell said. “Since that time, my office has been collaborating with the restaurant industry for months on a plan that we can all agree on – straws on request. This means customers will have to ask for a straw if they need one. [Now], I am announcing the goal of phasing out single-use straws entirely in the city of Los Angeles by 2021.”

O’Farrell and Martinez were joined at the City Hall announcement by representatives of Heal the Bay and its “Mon-straws-ity” (a character wearing a costume made of single-use plastic straws) to illustrate the damage straws can have on the environment. He cited statistics from Science Magazine indicating 500 million plastic straws are used daily in the United States, eight tons on plastic straws make their way into the oceans annually, and 8.3 billion straws pollute beaches throughout the world.

“Eliminating plastic straws is something we can easily do without requiring a drastic change in our behavior, and Angelenos have shown again and again they are willing to make changes for a healthy environment,” O’Farrell said. “We have a lot of work to do.”

Martinez, who is chair of the council’s Energy, Environment, and Social Justice Committee, said she is also concerned about the impact single-use plastic straws have on the environment, particularly because they do not biodegrade. She acknowledged that some people with disabilities must use straws, so the initiative would allow restaurants to give them to disabled customers.

“[We are taking] another step toward making L.A. a zero-waste city,” Martinez said. “This proposed action will be the first step toward removing one more item from our waste stream that eventually ends up in our landfills.”

Shelley Luce, president and CEO of Heal the Bay, added that single-use plastic straws are among the trash routinely picked up by the organization’s volunteers.

“Since 2000, Heal the Bay volunteers have picked up over 121,000 straws and stirrers from Los Angeles County beaches,” Luce said. “It’s heartening to see businesses recognizing the problem and becoming part of solution.”

The state law banning full-service restaurants from offering customers single-use plastic straws unless requested goes into effect on Jan. 1. Restaurants that do not comply would be warned for first and second violations, followed by $25 fines for each day of subsequent violations, up to a total of $300. The law would be enforced by county authorities under the California Retail Food Code. The details on how the city would enforce its ordinance are being worked out.

Representatives of McDonald’s said the company is considering a straws on request policy and is also moving toward using more recyclable materials.

“As one of the world’s largest restaurant companies, McDonald’s recognizes it has a unique opportunity to address some of the world’s most pressing social and environmental challenges, and the company recently launched its Scale for Good platform to do just that,” a statement from McDonald’s read. “One of the platform’s priorities is packaging and recycling, and earlier this year, McDonald’s announced a goal to source 100 percent of guest packaging from renewable, recycled or certified sources by 2025. Also by 2025, it is McDonald’s goal to recycle guest packaging in 100 percent of its restaurants.”

Ti Chang, who owns 13 McDonald’s restaurants in Southern California, said he believes environment stewardship is important, but cautioned that it may take time to implement a straws only by request policy. He said the manufacture of straws using other materials such as paper has not reached the level where it could support large fast food chains.

“We don’t have that yet, but we are working on it. There are materials. We need time to prepare,” Chang said. “The discussion needs to start. Anything to preserve the environment for future generations is a good idea.”

ShakeOut prepares L.A. for the next big one