In 2013, endurance athlete Diana Nyad became the first person to swim 111 miles between Havana, Cuba, and Key West, Florida, without a shark cage. The 53-hour trek was completed on Nyad’s fifth attempt, and marked the culmination of her lifelong ambition to swim the distance between the state where she grew up and the “little island” off the coast, she said. 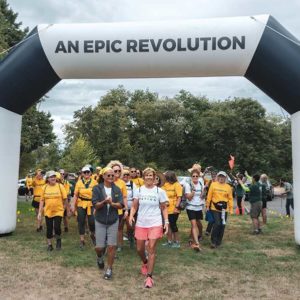 Local resident and swimmer Diana Nyad (center) is leading community walks to demonstrate the benefits of fitness and community building. The next walk is scheduled on Saturday morning in Pan Pacific Park. (photo by Yuri Chaufour)

While most people could never endure such a grueling endeavor, they can join Nyad, who was 64 when she completed the swim, for an exercise walk on Saturday, Oct. 6, beginning at 9 a.m. in Pan Pacific Park. Nyad, who has lived on the outskirts of Hancock Park for the past 10 years, and her business partner Bonnie Stoll, are launching a series of walks in Pan Pacific Park on the first Saturday of each month as part of their EverWalk initiative.

Nyad, who has been leading yoga sessions near the swimming pool in Pan Pacific Park on Saturdays, said she expects 60-70 walkers for the first Saturday.

“At 9 a.m., we will do a yoga session and get to know each other,” Nyad said. “Then, they can walk one, two, three, four or five miles through the park. The whole idea is to meet people in your neighborhood who also like to walk and hopefully, inspire them to walk during other parts of the week.”

“It was a natural fit for Mid City West given our plans to get people walking,” Epstein said. “One of the things we are trying to do is do is figure out, how do we address climate change, and get people out and actually doing things?”

Epstein said Mid City West is promoting the walk on social media and members will participate. Nyad’s hope is to get people interested in coming out, staying fit and being part of the community.

The event in Pan Pacific Park comes on the heels of long-distance walks she has led from the Canadian border to Seattle, and from Los Angeles to San Diego. Endurance sports run in her blood, Nyad said, and they give participants a sense of confidence and accomplishment.

Nyad said Pan Pacific Park is a perfect place to exercise. People can walk one-mile loops in a safe, green environment away from traffic and the concrete streetscape of the city. Nyad and Stoll are also seeking ambassadors who will lead other walks as part of the EverWalk initiative. The events are free and coincide with similar events being held in other major cities in the United States.

“Instead of sitting in front of a computer, if you walk, you are getting out and looking around, looking at magnificent trees and looking at nature,” Nyad said. “You’re not technology bound.”

Nyad, who has also lived in New York and Paris, said Europeans walk – not drive – to neighborhood places, which has a multitude of benefits, the least of which is improved personal well-being.

“We are trying to turn America into a nation of walkers,” Nyad added. “We would love to have people come out and join us.”