Townscape Partners, a development company seeking to build the 8150 Sunset project along Sunset Boulevard near Los Angeles’ border with West Hollywood, has reached a settlement with opponents Fix the City in a move that largely clears the way for the project to move forward. 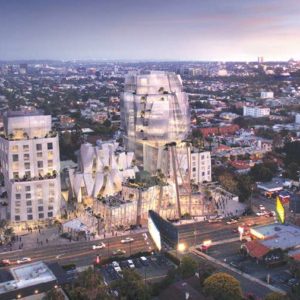 A rendering of the 8150 Sunset project shows its configuration on Sunset Boulevard. (photo courtesy of Visualhouse)

Townscape and Fix the City issued a joint statement on Oct. 1 about the settlement, which calls for a public hearing to be held over the removal of a dedicated right turn lane and a triangle-shaped median at the southwest corner of Sunset and Crescent Heights boulevards. The Los Angeles City Council approved the Frank Gehry-designed 8150 Sunset project in 2016, but Fix the City filed a lawsuit later that year over the removal plans for the turn lane and median. A lower court ruled in favor of Fix the City, and the developer and city filed an appeal. An appellate court judge ruled in March that the city is required to hold a hearing about the turn lane and median removal, which satisfied Fix the City.

“Following Fix the City’s victory in the appellate court requiring the City of L.A. to conduct a street vacation hearing before reconfiguring the intersection of Sunset Blvd. and Crescent Heights, [Fix the City] and Townscape Partners are pleased to announce that we have resolved the remainder of the outstanding issues regarding the 8150 Sunset Blvd. project,” the statement read. “FTC is hopeful that this victory establishes the need for a proper street vacation process, including required hearings, throughout the city. As a result of the court’s ruling directing the City of L.A. to conduct the vacation hearing, [Fix the City] has agreed not to raise any further objections to the project or street vacation. [Fix the City] continues to support the enhancement of intersections to achieve the highest level of pedestrian safety and facilitate the least amount of vehicle congestion possible.”

Under the settlement, the developer will pay Fix the City’s legal fees – an amount that was not disclosed – but no other damages or monetary assessments. However, the settlement agreement includes minor additions such as the developer requiring tenants/leasees to place external defibrillators (emergency devices that help people suffering heart problems) in all units, and that an external defibrillator be installed in the front lobby. Additionally, the settlement requires the developer to install pedestrian safety traffic signals at all intersections adjacent to the project, and provide $4,000 to Los Angeles Fire Department Station 41, located at 1439 N. Gardner St. Fix the City will not oppose or delay the project further under the settlement.

The 8150 Sunset project will include 229 residential units, with 15 percent set aside as affordable housing, and 65,000 square feet of commercial space. The property was formerly the site of the Garden of Allah, a hotel and destination popular with celebrities before it was demolished in 1960 and replaced with the Lytton Savings building.

Preservationists attempted to save that building, which now houses a Chase bank branch. In 2017, a Los Angeles Superior Court judge ruled in favor of the Los Angeles Conservancy’s effort to save the Lytton Savings building, but an appellate court later overturned that ruling. In June, the California Supreme Court declined to consider the case, which ended the bid to save the building. The developer plans to demolish the bank building, said Brian Lewis, a spokesman for Townscape Partners.

Fix the City board member Jim O’Sullivan, who is also president of the Miracle Mile Residential Association, said the fight against the project was about preserving the public process for street vacation. He said allowing the developer to remove the turn lane and median, which are public property, without holding a hearing would set a precedent.

“The only thing we wanted was a public hearing letting people weigh-in,” O’Sullivan said. “We wanted to make sure the city followed the rules. There has to be a public hearing.”

Lewis said a public plaza will be built at the site of the turn lane and median but added that the project will move forward without the plaza if the city rules the street infrastructure shouldn’t be removed. A hearing about the street vacation will be held by the Board of Public Works, and the timeline for the process remains uncertain.

“The city has a lengthy, complicated process for street vacation,” Lewis said. “It takes six to nine months for it to work its way through the city process.”