Award-winning artists’ collective Rogue Artists Ensemble will take over West Hollywood’s Plummer Park for a site-specific immersive theater experience with “Señor Plummer’s Final Fiesta,” celebrating the life of Eugene Plummer, a prominent figure in what is now West Hollywood, running from Oct. 19-Nov. 4 with performances on Thursdays, Fridays, Saturdays and Sundays at 7:30 p.m. 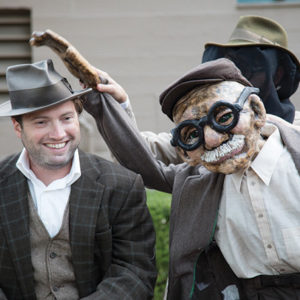 “This is a once in a lifetime project where we get to tell the story about a real figure in our City’s history in the same place that he once lived so many years ago,” West Hollywood Mayor John J. Duran said.

The play takes place in the Great Hall and Long Hall and the connected rooms and courtyard at Plummer Park. Audiences will experience a multitude of stories from Eugene Plummer’s past and the history of Los Angeles, and they will be able to pick and choose which paths and characters they follow.

“The audience will have the chance to interact one on one and learn from the characters and be a part of the story themselves. With so many possibilities and stories to explore there is no way you can see the entire show in one night. Everyone’s experience will be unique, helping to encourage community dialogue and hopefully do the very thing Eugene tried, bridging communities,” Cawelti said.

Tickets range from $35-$55, which include options for performance with drinks provided by Angel City Brewery.

Travel to ‘Oz’ with the Nine O’Clock Players