Rent control debate heats up ahead of Election Day

With Election Day looming, activists in support of Proposition 10, the initiative that could expand rent control in California, look to turn out the vote with last-minute canvassing, social media campaigns and public rallies, such as the tent city demonstration held on Fairfax near Third Street on Saturday, Oct. 20. 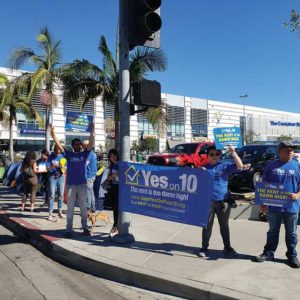 “Our goal was to paint a visual for the people of L.A. of what the city will look like without rent control … there will be tent encampments everywhere in L.A.,” said Mel Tillekeratne, founder of the #SheDoes movement, which promotes sheltering homeless and vulnerable women, and organizer of the demonstration. “There are too many landlords who raise rents by 30 to 40 percent – you can’t expect people to make that payment.”

The ballot initiative, if it gains enough supporters, would overturn the Costa-Hawkins Rental Housing Act, which prevents cities and counties from imposing rent control on apartments built after 1995. The polls currently show Proposition 10 locked in a tight race. According to a USC Dornsife/Los Angeles Times poll released earlier in October, 41 percent of likely voters support the initiative, with 38 percent opposed and 21 percent undecided.

The tent city, which lasted from 9 a.m. to 5:45 p.m., involved about 40 people from political organizations and homeless advocacy groups such as Housing Now, L.A. on Cloud9, Coalition for Fair Housing and Monday Night Mission hosting up signs with slogans such as “Yes on 10” and “The Rent is Too Damn High.”

“[Landlords are] displacing people,” Tillekeratne said. “In some of these communities, there’s nowhere else where people can go.”

While the campaign around the initiative has mostly pitted tenants against apartment owners, Saturday’s demonstration included one landlord from Beverly Grove, Brian Harris, who operates a rent-controlled building and supports Proposition 10.

“I’m noticing all around me the buildings that are not under rent control currently [and] that are getting major rent hikes – I’m noticing the intimidation and the tactics of new owners trying to get people out – and it’s changing our community for the worse,” Harris said. “We really need to do everything that we can to stabilize our communities.”

Tillekeratne said the demonstrators purposely chose the Fairfax corridor because of its heavy traffic, especially on a Saturday afternoon, and to also reach middle to upper-middle class Angelenos visiting the outdoor shopping area.

“We wanted to show that, you might not see [all the homeless tents] now, but it’s coming,” Tillekeratne said.

With a little under two weeks before Election Day on Nov. 6, Tillekeratne has his work cut out for him. He’ll continue campaigning through #SheDoes and the other homeless services organization he founded, Monday Night Mission, hoping to reach people through canvassing on the streets as well as with social media to reach younger voters. #SheDoes enlisted the help of actress Milla Jovovich, who on Monday posted on her Facebook and Instagram pages a video of her declaring her support for Proposition 10.

The campaign for the passage of the initiative has also gained the support and funding of the AIDS Healthcare Foundation, which has donated nearly $23 million of the $24 million total financing the Yes on 10 fight.

However, on the other side of the campaign, opponents of Proposition 10 – primarily landlords and business groups – have contributed far more. The fight against the initiative totals over $62 million in donations, according to campaign finance records.

Opponents, such as the Los Angeles Area, Hollywood and Beverly Hills chambers of commerce, argue rent control will only worsen the state’s housing crisis by deterring development. In a statement, the Hollywood Chamber of Commerce called the initiative “dangerous and reckless.”

“It offers no protection for renters, seniors or veterans. If passed, this would make housing less available and less affordable and will eliminate protections for homeowners. Proposition 10 will lead to a decline in the market value of these properties and would also adversely impact the construction of new rental housing in the state,” read the statement.

The Beverly Hills Chamber similarly argued in a statement that Proposition 10 would lead to “a confusing and ineffective patchwork of laws” as the state’s cities enact varying policies.

“I have rent control, but if I didn’t, where would I be? I already pay a big part of my income towards my rent,” Tillekeratne said. “[And the other side of the campaign,] they’re just scaring people with their commercials. Housing prices aren’t going to immediately go up or down – that’s not going to happen just on Proposition 10 passing. It’s going to take a long time for cities to pass rent control statues.”

The activist also emphasized that at the heart of his campaign was homeless advocacy. The Los Angeles Homeless Services Authority’s Homeless Count reported 52,765 individuals experiencing homelessness across the county in 2018, a stark increase from the 38,717 individuals reported in 2010, but slight decrease from 2017. However, the 2018 report also found an increase of people experiencing homelessness for the first time, which many attribute to growing rents.

“We’re doing this because we can’t stop the bleeding of homelessness,” Tillekeratne said.

Both the West Hollywood and Beverly Hills city councils previously endorsed Proposition 10, and on Tuesday, Oct. 23, the Los Angeles City Council threw its support behind the initiative as well.

“Skyrocketing rents are a leading cause of the homelessness crisis.Yet a state law has shackled the hands of local governments to address high rents,” Councilman Paul Koretz, 5th District, said in a statement. “Proposition 10 will give local leaders the power to take the steps necessary to protect renters and prevent homelessness.”