TED talks and conversations on ageism, programs on the beauty of sounds and urban gardening are just a few of the activities West Hollywood’s Seniors in Action pilot program has introduced to fight isolation among older residents. 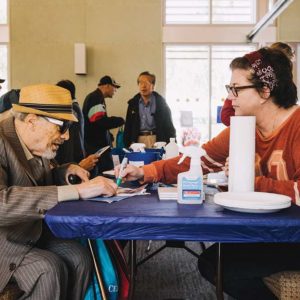 The Seniors in Action pilot program launched in May as a part of West Hollywood’s celebration of Senior Month, which included the Spring Fiesta Senior Dance and Senior Health Fair (above). (photo by Jonathan Moore, courtesy of the city of West Hollywood)

“It’s a chance for the city’s senior residents to get out of their living rooms,” said John Allendorfer, vice chair of West Hollywood’s Senior Advisory Board and a participant in the Seniors in Action program. “It gives seniors a sense of belonging and visibility.”

The free program, which brings together residents in their late 50s to 90s, launched in May during Senior Month and offers participants a space for an hour and a half of dialogue and activities on the fourth Tuesday of every month in the West Hollywood Library.

Each session begins with a TED talk video viewing, with topics ranging from preventative health care to communication skills, to prompt conversations. A group activity follows with more discussion and the gatherings conclude with refreshments and socializing. Over the past six months, the group has collaborated on art pieces, made music and shared memories.

“It can get personal, but in a good way,” Allendorfer said. “There’s a lot of young people in the city, you know with Boystown and the Strip, but the program shows that people 55 or older are a significant part of West Hollywood, and that they are a part of a city that recognizes them.”

Seniors in Action will be wrapping up its pilot program later this month with its sixth meeting, but the success of the gatherings has already spurred attendees to make plans to continue it through the holidays, as Leslie Isenberg, the city’s social services supervisor, said during an update on the program at the Human Services Commission meeting on Tuesday, Oct. 9.

“We’ve been pleasantly surprised by the attendance … About half of the attendees are considered regulars and each month we have a dozen or so new folks,” Isenberg said, noting that in total about 20 to 25 people have showed up each month. “And we do believe that we are addressing isolation and loneliness through this. There’s one person with a partner with Alzheimer’s and this is about the only time that she gets out.”

According to Isenberg, the program, which has thus far been a collaboration among her, West Hollywood Social Services Specialist Corey Roskin, the Senior Advisory Board, and Be Well WeHo coordinator Monica Dunahee, has seen a lot of success with little cost.

“We’ve talked about what sounds evoke … any sound that evokes a certain memory or something to someone, and we’ve had some really lovely contributions to that, including a 90-something-year-old woman who, whenever she hears a particular song, it reminds her of when her mother sang that song to her in the 1920s,” Isenberg said. “People have connected in the group and have made plans outside of the group. People have gone dancing together.”

In 2019, the program’s supervision will be transferred from Isenberg and Roskin to Jewish Family Services, which operates social and recreational services for older residents at the West Hollywood Comprehensive Service Center in Plummer Park on the city’s east side.

However, the monthly Seniors in Action meetings will continue to be held at the library on the city’s west side. Allendorfer and the West Hollywood Human Services Commission Chair Patrick Shandrick emphasized the need to offer services for the city’s senior residents at different locations.

“I think it is important to start to spread out older adult activities throughout the city,” Shandrick said.

Isenberg agreed, adding that holding the Seniors in Action program on the other side of town had reached a different set of older residents who were previously not involved with senior activities at Plummer Park.

In all, the Human Services Commission responded positively to the Seniors in Action update. Commissioner Barbara Meltzer had only one critique, suggesting the program’s name be changed to avoid using the word “senior,” which she felt might keep some people away.

The City Council will also receive an update on the Seniors in Action program during its meeting on Monday, Oct. 15.