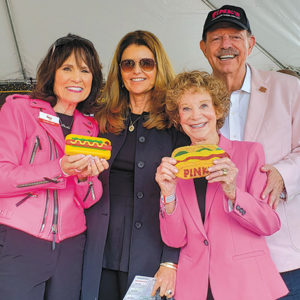 Approximately 1,000 people attended the event, which benefits Special Olympics programs. The Pinks were honored for their more than 18 years of support for the Special Olympics Southern California.

Shriver’s  parents, Eunice and Sargent Shriver, started the Special Olympics in 1968. Eunice Shriver was a sister of President John F. Kennedy and Sens. Robert F. Kennedy and Ted Kennedy. Sargent Shriver served as the United States ambassador to France during the Lyndon B. Johnson presidency. Maria Shriver has been a lifelong advocate for people with intellectual disabilities and is a member of the international board of Special Olympics.