Pedestrian dies after being struck by car

Police are investigating the death of a 39-year-old woman who was struck by a vehicle on Sept. 24 at approximately 2 a.m. while crossing Santa Monica Boulevard. 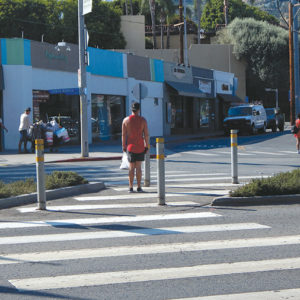 The city of West Hollywood has installed new signals at multiple intersections along Santa Monica Boulevard to improve safety, including at Palm Avenue. (photo by Edwin Folven)

The victim, who has been identified as West Hollywood resident Marina Morozova in media reports and on a GoFundMe page, was hospitalized and died on Sept. 28. The victim was walking southbound across Santa Monica Boulevard near Westbourne Drive when she was struck by a driver traveling west on Santa Monica Boulevard. The unidentified driver, a 21-year-old male resident of Los Angeles, stopped and was interviewed by deputies from the West Hollywood Sheriff’s Station. Alcohol or drugs were not involved, and the driver was not cited or arrested, said Det. John Heald.

The intersection is one of many used frequently by pedestrians along Santa Monica Boulevard between La Cienega and San Vicente boulevards. Numerous bars, nightclubs, restaurants and other businesses line the boulevard, and the area is busy at most times of the day and night.

City officials have taken steps to improve safety. Approximately one year ago, new traffic signals were installed at Santa Monica Boulevard’s intersections with Palm and Hancock avenues, and Westmount and West Knoll drives. The signal at Westbourne Drive, which was in place prior to the most recent signal installations, was upgraded with new turn lanes and signal arrows. That intersection, where the collision occurred, is offset, with the northern and southern portions of Westbourne Drive connecting with Santa Monica Boulevard at different sites. There is also a median at the location.

West Hollywood City Engineer Hany Demitri said the new signals and upgrades were implemented to reduce the risk of vehicle vs. pedestrian collisions. The city spent $1.3 million on the pedestrian safety project.

“We take a very proactive approach to constantly improving and enhancing safety in our city,” Demitri added. “Any accident in our city … is very regrettable and unfortunate.”

Because the new signals have only been in place for one year, there is insufficient data to determine their impact on safety. Demitri said feedback has been positive and many people have said they feel safer because of the new signals and other safety measures. 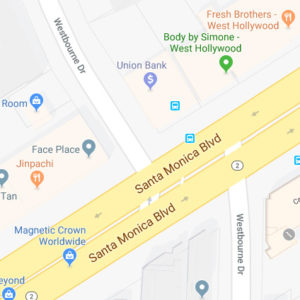 The intersection of Santa Monica Boulevard and Westbourne Drive, where the pedestrian was struck, is offset. (photo courtesy of Google Maps)

“There is no pattern going on,” Heald said.

The detective added that people should always be aware of their surroundings, particularly when crossing streets at night.

“All drivers and pedestrians should be cognizant about their surroundings and the dangers when crossing a street,” Heald said. “We don’t know who caused this one yet. It could be months until we complete the investigation.”

‘Venom’ is an enjoyable short film

Ten injured when crowd surges at rapper’s event in Hollywood