Los Angeles is rallying behind their team to win the World Series. Local businesses have hung banners and turned blue in celebration. Cross country rivalries have laid their claims and Angelenos are ready to cheer on the Dodgers when they return to Chavez Ravine on Friday for Game 3 at 5 p.m. 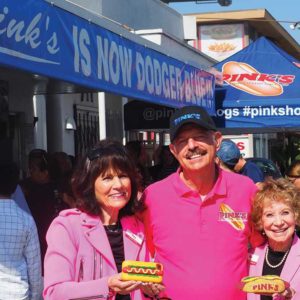 Pink’s Hot Dogs turned blue for the second year in a row to celebrate the Dodgers’ second consecutive National League Pennant. The team is trying to win its first World Series title since 1988.

“We didn’t expect this to happen, but boy, once it did, we just went to work,” said Richard Pink, who owns the hot dog stand with his wife Gloria and sister Beverly.

Nearly two days of work went into putting up a blue banner, painting Dodgers logos on each side of the building, turning the floors blue and adding several other Dodgers-themed decorations to the restaurant.

The hot dog stand is also serving a Blue’s Hot Dog with mustard, onions, chili, cheese and bacon for $4.88, and donating $3,000 to the Los Angeles Dodgers Foundation.

“It has been just a thrill. We couldn’t wait to get to work. We couldn’t believe it when we were listening to the final minutes of the game,” Pink said, referring to the Dodgers’ Game 7 NLCS victory over the Milwaukee Brewers.

Pink’s prediction for the series is Dodgers in six games, and he’s backing it up with a friendly wager with Spike’s Junkyard Dogs in Boston. If the Dodgers win, Spike’s will make a donation to the Dodgers Foundation, the team’s official charity. If the Red Sox win, Pink’s will make a donation to the Jimmy Fund, a Boston-based organization that helps children with cancer. 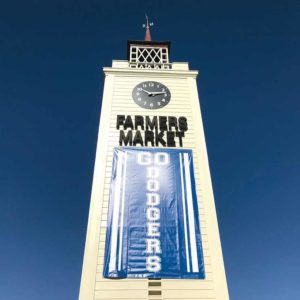 “I grew up not far from Fenway as a long-suffering Boston Red Sox fan, and it is a sign of how deeply devoted I am to my constituents that I will be rooting for the Dodgers. In the last Dodgers-Red Sox matchup 100 years ago, the Red Sox won. This time, it’s going to be Dodger blue all the way,” Schiff said. “It’s been 30 years since the Dodgers won the series, which may not seem like that long to Sox fans, but as a point of reference, it’s almost as long as Joe has been alive. All of which is to say, we’ll soon be eating lobster courtesy of the gentleman from Bean Town.”

The Original Farmers Market joined in the tributes as well, hanging a banner from its iconic clock tower.

Gary Twinn, manager of the Farmers Market Bars, invites Dodger fans to watch the game and enjoy one of the many beers they serve on tap.

At Canter’s Deli, they’ve turned their traditional black and white cookies to blue and white. Grab a dozen to go or get one free when you purchase a sandwich while dining in.

However you choose to celebrate, this town is determined to get a World Series victory after a 30 year drought. Let’s go Dodgers! We’re #LADetermined!