The Los Angeles Philharmonic celebrates its centennial year with LA Fest, a genre-spanning exploration of the city that has inspired it for the last 100 years, across six performances between Oct. 4-14 at the Walt Disney Concert Hall. 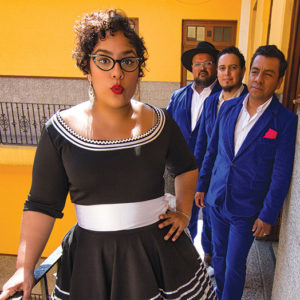 LA Fest will offer a glimpse into Los Angeles’ musical makeup, featuring the world premiere of “Sustain,” a new work by Andrew Norman from Oct. 4-7; additional world premieres of LA Phil-commissioned pieces on Oct. 9; orchestral collaborations led by Gustavo Dudamel, the music and artistic director for the LA Phil, with some of the city’s most world-renowned musicians, including Andrew Bird on Oct. 11, Moby on Oct. 12 and Herbie Hancock on Oct. 13; and performances from La Santa Cecilia and Cuco on Oct. 14.

LA Fest will also include the world premiere of an immersive sound and art installation by LA-based composer and sound artist Ellen Reid. “Oscillations: One Hundred Years and Forever,” commissioned by the LA Phil, will take place in Walt Disney Concert Hall’s outdoor Keck Amphitheatre from Oct. 9- 14. On Oct. 9 and 11, the installation will feature live performers including a choir, vocal soloists and percussionists.

As part of the LA Phil’s Fluxus Festival, LA Fest will include Christopher Rountree’s Fluxus Commitment Booth, which can be experienced in the Walt Disney Concert Hall Lobby on Oct. 4, 6, 7 and 9. Fluxus Festival is a season-long survey of the experimental and deeply influential Fluxus movement of the 1960s and 1970s, curated by Rountree in collaboration with the Getty Research Institute.

Preceding the performances on Oct. 11-14, an LA Fest Lounge in Walt Disney Concert Hall’s BP Hall will host complimentary tastings of a special LA Phil 100 Brut IPA brewed in collaboration with LA Ale Works. The Hawthorne-based brewery worked with members of the LA Phil to create a beer that spotlights the dynamic aromas of Los Angeles, with notes of lemon peel and mountain pine, lime and honey fragrances, and packed with orange zest, inspired by the pastoral groves that blanketed Los Angeles during the LA Phil’s founding.

“100 years of bringing music to Los Angeles deserves an appropriate celebration – one that is big, accessible, vibrant, fun, and representative of the amazingly diverse communities that define the City of Angels,” Dudamel said. “We have drawn inspiration from all corners of Los Angeles, which will be manifested in a stunningly eclectic range of music – literally, something for everyone, from orchestral music to Latin, pop and jazz, complemented by immersive visual art and experiences. Please join us and prepare to be amazed.”