The Japan Foundation, Los Angeles presents “Carving Across Borders: Block Prints of Hiroshi Yoshida,” a new exhibition featuring 22 woodblock prints by Hiroshi Yoshida that capture the beauty of his travels in Japan, the United States and around the world, on view through Oct. 31. 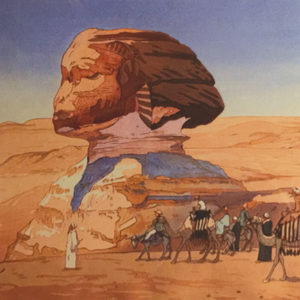 Hiroshi Yoshida traveled around the globe, including to Egypt as seen above, as he created his woodblock prints. (photo courtesy of Japan Foundation, Los Angeles)

Hiroshi Yoshida was born in 1876 in Fukuoka Prefecture, Japan. After having years of formal and intensive study of Western-style painting, 23-year-old Yoshida departed Japan for the first time to the United States with a collection of his paintings. Soon after his arrival, he found success early on and sold a large number of his art works to the Detroit Institute of Arts, the Boston Art Museum and other galleries on the East Coast at the turn of the 20th century.

It was the beginning of a long and successful career during which he traveled extensively around the globe as he further developed his artistic skills. During these travels, he created many works depicting iconic landscapes and scenes of everyday people’s lives at a time when international travel wasn’t easily accessible.

Years later, at the age of 49, he turned to woodblock prints as a medium of expression and began publishing numerous series of prints from his own printmaking workshop where he supervised closely every step of the creative process done by the skillful carvers and printers.