‘Halloween’ is a triumph 40 years in the making

John Carpenter’s legacy remains intact thanks to “Pineapple Express.” That is to say a director with a penchant for stoner comedies somehow found a way to breath new life into one of the longest running slasher film series. How’d that happen? Turns out, the answer is simply to ignore all the shameless sequels and create a direct sequel, four decades later, depicting a grown-up scream queen whose PTSD has transformed her into a survivalist. 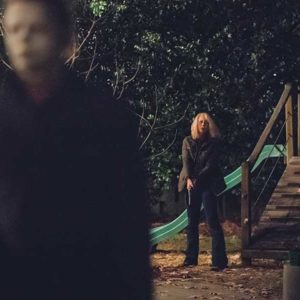 All the usual ingredients are here. A psychologist (Haluk Bilginer) perhaps too fascinated with understanding the ID of a maniac who murdered five people one Halloween night. Plenty of partying teens unprepared for what lurks in the shadows. A daughter, Karen (Judy Greer), who doesn’t believe the threat is real. A former final girl, Laurie Strode (Jamie Lee Curtis), prepared for an eventuality at the cost of her happy life.

And as Micheal Myers (Nick Castle reprising the role) – who never seems to die while he dons a white-painted William Shatner mask – descends upon even more victims, we once again idly watch as one of the greatest slashers to date conducts those iconic piano notes with his kitchen knife.

To call “Halloween” a throwback isn’t the whole story. It hits all the right marks before adding several new ones to the mix. Don’t expect hysterical women running up stairs instead of out the front the door. For that matter, the most drawn-out, hysterical moment comes not from a female target but an inebriated dolt named Oscar (Drew Scheid). His performance is hardly memorable, but replacing the long-held screaming woman with someone else feels (safely) subversive.

Director David Gordon Green (“Your Highness,” “The Sitter”) found his calling. Most up-and-coming filmmakers begin with a horror film, prove they can generate a hit with a minimal budget before moving on to bigger things (i.e., from “Saw” to “Aquaman” for James Wan). Green reverses course, proving horror isn’t a start but a direction worthwhile for anyone with a good story.

“Halloween” also serves as a fascinating case study in understanding a franchise’s canon. Rather than bother with the baggage of “Halloween” across nine films (not including Rob Zombie’s remakes), including Lauri’s cheap death in “Halloween: Resurrection,” this one pretends only the first film exists in the official timeline. Like “Superman Returns,” set after the Richard Donner cut of “Superman II,” bad writing can be written out of existence.

When granddaughter Allyson (Andi Matichak) debunks the rumor that Laurie is Micheal’s sister, an idea established later in the series, this move transforms all those films into urban legend. What we see from 1981’s “Halloween II” on becomes hearsay, a community’s rumor mill played out as if it’s fact.

This is justice for Laurie, who continues in a role worth exploring further. She no longer needs to prove her acting chops by screaming. Instead, Curtis explores the roots of trauma. She tries to engage with others, namely her family, but some wounds never entirely heal, despite everyone else’s request that she merely “move on,” as her daughter demands. Good thing she doesn’t, instead learning how to fight and transforming her isolated home into a combat zone fit for a boogieman.

“Halloween” arrives just in time for the spooky holiday season, adding to the many incredible horror films that premiered this year. While future installments might take the story in absurd directions, for now, this is essential viewing for fans and anyone else in need of a few good scares build into a film that doesn’t run out of steam in the element hour.

P.S. If any of you had to suffer through that ridiculous Fox News headline “Jamie Lee Curtis wields firearms in new ‘Halloween’ movie despite advocating for gun control,” let’s be clear about this: a film is fiction. Shocking revelation, I know. Actors can play roles and still have separate opinions. In sum, Fox News remains partisan trash, while Curtis is a national treasure.