Last call in California’s bars will remain 2 a.m. after Gov. Jerry Brown vetoed a bill that would have given Los Angeles, West Hollywood and seven other cities the option to extend their hours for alcohol sales to 4 a.m. 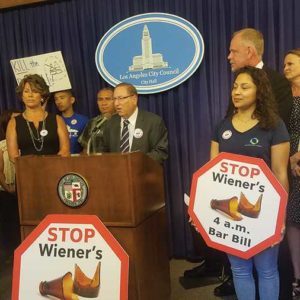 Councilman Paul Koretz has been a staunch opponent of SB 905. (photo courtesy of the 5th District Council office)

“California’s laws regulating late night drinking have been on the books since 1913,” Brown wrote in his veto message. “I believe we have enough mischief from midnight to 2 without adding two more hours of mayhem.”

The bill, SB 905, was introduced by state Sen. Scott Wiener (D-San Francisco), his second attempt to allow bars to extend their hours to 4 a.m., similar to places such as New York City, Las Vegas and Miami.

“Our 2 a.m. blanket closing time is a bad leftover policy from over a century ago,” Wiener said after the governor announced the veto on Sept. 28. “Times have changed, and our policies should as well. This bill was about allowing local communities who affirmatively asked for flexibility in closing times to decide what works best for them. We should embrace and support our nightlife industry which brings billions of revenue to our state and employs millions of people. It is a shame that we will continue to stifle our nightlife economy, but I remain committed to modernizing these outdated laws.”

Wiener will bring the bill back next year, according to his spokesman, Victor Ruiz-Cornejo. In 2017, Wiener’s first version of the bill would have applied to the whole state. It passed on the Senate floor, but stalled in the Assembly. This year, it made it out of the Legislature after it was amended to include only nine cities as part of a pilot program that would have started between 2021 and 2026. If the bill is reintroduced and approved by the Legislature next year, it will advance to the desk of a new governor. Brown is termed out, and the Democratic candidate, Lt. Gov. Gavin Newsom, has a 12-point lead over Republican businessman John Cox among likely voters in the Nov. 6 race for governor, according to the Public Policy Institute of California.

The California Alcohol Policy Alliance was one of several advocacy groups celebrating the veto.

“Governor Brown’s veto of SB 905 is a great victory for the health and well-being of all Californians,” said Ruben Rodriguez, a founder of the alliance. “The hospitality and alcohol industries, and their minion Senator Wiener, have been stopped one more time. Thank God that sane minds have prevailed.”

Actor and activist Kurtwood Smith, known for TV shows such as “That ‘70s Show,” added that he was “glad to see the governor once again applying common sense in dealing with an issue that affects us all.”

Smith joined Los Angeles City Councilman Paul Koretz, 5th District, another staunch opponent to prolonging local nightlife hours, for a press conference at City Hall in August to warn about the potential safety issues the additional hours of alcohol sales could cause. According to the Centers for Disease Control and Prevention, 10,387 people were killed in crashes involving drunk drivers in California from 2003-12, and SB 905 critics worried that the rate of those deaths would increase had the bill passed. The bill called for reports to be made about the impacts of expanded hours for alcohol sales, but did not provide funding for additional law enforcement cities would likely need during the added hours.

Despite their opposition, the bill passed the Legislature with support from local representatives including Assemblyman Richard Bloom (D-Santa Monica), Sen. Holly Mitchell (D-Los Angeles) and Sen. Ben Allen (D-Santa Monica), who was a co-author.

Koretz thanked the governor in a tweet following the announcement of a veto.

“No good can come from serving alcohol until 4 a.m.,” he said.

New wave Italian cuisine at No. 10