Los Angeles Fire Department arson investigators are trying to determine the cause of a blaze on Oct. 14 at a vacant single-family residence at 252 S. June St. The two-story house sustained significant fire damage, was deemed unsafe and was red-tagged by the city. 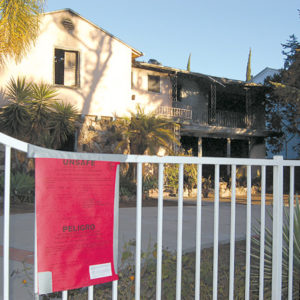 A house on June Street just north of Third Street has been red-tagged after a fire erupted on Oct. 14. (photo by Edwin Folven)

The fire was reported at 5:10 a.m. Firefighters arrived to find flames and smoke coming from the first floor. Before it was extinguished at 6:11 a.m., the flames extended into the attic and basement. No injuries were reported.

Cindy Chvatal-Keane, president of the Hancock Park Homeowners Association, said the house has been vacant for years and there were recent concerns among neighbors about transients staying inside. She did not know the name of the owner.

According to Los Angeles Building and Safety Department records, the house has been the subject of six code enforcement investigations dating to 2009 for violations such as leaving an abandoned or vacant building open to the public, not keeping the pool clean, and having fences and hedges that were either missing or were too high. All of the investigations were closed except one pending complaint of the pool not being kept clean dating from July 2017.

The Los Angeles Building and Safety Department does not provide information about ownership and LADBS and planning department records do not indicate who owns the property. The house is fenced, and signs warning that the building is unsafe were posted after the fire. It is unclear how long the investigation will take and what will happen next at the site.