The budget for Phase II of improvements to West Hollywood Park has been increased by $5.65 million, raising the cost of the second half of the project to over $101 million. The updates have been underway since January 2017. 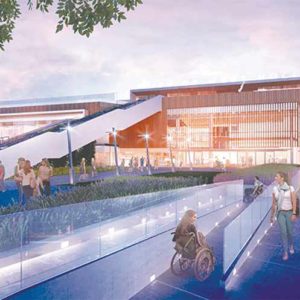 West Hollywood Park, currently under renovation, will receive security updates, including key card access points and design changes to the aquatics center to provide better visibility for staff. (rendering courtesy of the city of West Hollywood)

The majority of the costs come from new security elements at the park, located at 647 N. San Vicente Blvd., such as key card access points and cameras, design changes to the aquatics center to provide better visibility for lifeguards and staff, and configuring park restrooms with partition doors as opposed to full-height doors and roll-down doors to close off the space after park hours.

The money will also be spent on improving technology around the park to update network security and allow for centralized control of audiovisual components, lighting and digital signage systems, along with the addition of wayfinding signage.

The staff report for the budget increase details that many of these improvements “are driven by changes in the city’s approach to operating public facilities compared to when the project was originally designed.”

The City Council unanimously approved the increased budget at its Oct. 15 meeting, although councilwomen Lindsey Horvath and Lauren Meister took issue with what they felt was a lack of security around the park’s exterior restrooms.

Horvath proposed removing three of the four exterior restrooms, which would mean park attendees would primarily have to go into the community recreation center to use the restroom.

“My concern is that stand-alone, single-stall public bathrooms in the city have been a focus of occasional safety issues. In Plummer Park, for example, there have been intermittent instances of drug use, lewd conduct and aggressive behavior,” Horvath said. “I’ve heard feedback that indoor bathrooms at facilities such as West Hollywood Park Auditorium or the Community Center at Plummer Park are generally safer environments because there are recreation staff members and security guards at those indoor locations. I think it’s worth looking more closely at the issue of stand-alone, single-stall public bathrooms so that we can determine how best to balance needs and ensure a safe environment for all park users.”

Meister, who also mentioned that she had received complaints about restrooms being misused in Plummer Park, suggested that the partition doors of the exterior restrooms – which staff said would have an eight-inch opening at the bottom – be reconfigured so that the gap is not as high.

“Maybe there’s a different way of doing it, where you have some kind of bar or whatever that you could still see through, but it doesn’t have to be open,” she said. “In other words, so someone can’t slip underneath.”

Councilman John Heilman, who noted that he has used similar outdoor restrooms in Santa Monica, felt that while the security concerns were legitimate, they had already been addressed by staff.

“[The outdoor restrooms in Santa Monica] are reasonably safe, I would say. People can’t crawl underneath,” Heilman said. “I don’t think it’s a good idea for the park to be without restrooms and to force everyone to go into a building.”

In the end, the removal of the restrooms was rejected and the restroom configuration remained.

Meister took issue with the increasing cost of the project as well, calling the $5.6 million “nothing to sneeze at,” and was unsure as to why these additions were only being made now, considering the project has been in the making since 2002.

“I approved the increases proposed by staff because they were mostly necessary safety measures,” Meister said. “However, I don’t want to see the park construction become a money pit, and any future additions to construction costs and/or construction management will be closely scrutinized.”

Phase II of the West Hollywood Park project is about 30 percent complete, according to staff estimates. Upon its anticipated completion in 2020, the park will include picnic areas, landscaped green spaces, playgrounds, an enhanced aquatics and recreation center, and an AIDS monument.