Los Angeles Children’s Chorus’ new Artistic Director Fernando Malvar-Ruiz, who began his tenure on Aug. 1, ushers in a new chapter for the choral organization with the announcement of his inaugural season in 2018-19. 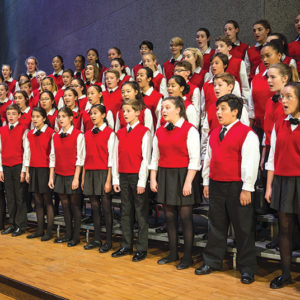 Los Angeles Children’s Chorus’ Artistic Director Fernando Malvar-Ruiz plans to bring the chorus to new and broader audiences, and increase the diversity of its membership. (photo by Jamie Pham)

The conductor and educator, only the third artistic director to lead LACC since its inception in 1986, will further hone the chorus’ sound and repertoire, and build upon its foundation as one of the most innovative arts institutions in Los Angeles and the country.

Malvar-Ruiz has announced a range of long- and short-term goals, including expanding the chorus’ artistic and physical reach, and increasing its presence in the community. He envisions bringing the chorus to new and broader audiences, increasing the diversity of its membership, providing new singing opportunities for the choristers, fostering current artistic partnerships while developing new ones, reimagining its concert presentations and enriching the overall experience of its 400 young singers, ages 6 to 18 from 50 communities across Southern California.

Since taking leadership of LACC just a few weeks ago, Malvar-Ruiz has already launched a new ensemble, the Mixed Chamber Choir, which is the first soprano, alto, tenor and bass group in the chorus’ history, bringing the total number of LACC choirs to seven. The others include Concert Choir, Chamber Singers, Young Men’s Ensemble, Intermediate Choir, Apprentice Choir and Preparatory Choir.

LACC performance highlights this season include an appearance in LA Opera’s production of “Hansel and Gretel,” led by James Conlon from Nov. 17 through Dec. 5 at the Dorothy Chandler Pavilion; its debut with vocal icon Meredith Monk in the West Coast premiere of her work “Cellular Songs” on March 2, 2019, at Royce Hall; and two Los Angeles Philharmonic engagements at Walt Disney Concert Hall – Stravinsky’s “Perséphone,” staged by Peter Sellars and conducted by Esa-Pekka Salonen on April 18, 19 and 20, 2019, and Mahler’s Symphony No. 8 conducted by Gustavo Dudamel on May 30, 31 and June 2, 2019. LACC also presents its Winter Concert on Dec. 9 and 16, and Spring Concert on May 5 and 12, 2019, both at Pasadena Presbyterian Church.

“Los Angeles Children’s Chorus, celebrated for its singular bel canto sound, is a world-class organization that serves a unique role in the cultural community,” Malvar-Ruiz said.

“It’s exhilarating to embark on this exciting new era with these exceptional singers and my esteemed LACC colleagues. And it’s a thrilling time to be in Los Angeles, which has truly become the cultural capital of the world.”

Traverse through landscapes and waterways