BLAST Sharks team swims ahead of the competition

BLAST Sharks, a local swim team offering professional coaching and technique instruction for swimmers of all ages and abilities in Hancock Park, West Hollywood and Burbank, is shredding the competition. 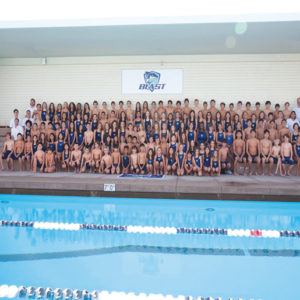 photo courtesy of the BLAST Sharks

The BLAST Sharks, headed by a group of national level swim coaches, placed third in the Junior Olympic Championships in Santa Maria at the end of July, while swimmer Dominic Margarino placed in the top 14 and 16 swimmers in the 400- and 200-meter free competitions, respectively. Among the superstars on the team is Coach Jesse Novak, who coaches at BLAST’s West Hollywood Pool site.

Novak competed at the Phillips 66 National Championships in Irvine last August. Margarino has also excelled during the 2017-18 season.

Margarino joined BLAST in 2015 at the age of 14 and became one of the fastest swimmers on the team. Last December, Margarino competed in sectionals in Yucaipa, where he qualified for finals in three events. His highest finish was fourth place in the 200-yard freestyle, with a time of 1:40.9.

In March, Margarino competed in the sectionals in Carlsbad, where hequalified for the Winter Nationals. His high school CIF season was also very successful. Margarino was named All American in the 200- and 500 meter freestyle competitions and finished his short course season with times of 1:38.5 and 4:28.4, respectively.

Margarino’s recent performance has garnered a lot of college interest and he is being actively recruited by Division 1 schools, including USC and the University of California, Berkeley.

Improvements in attendance at LAUSD