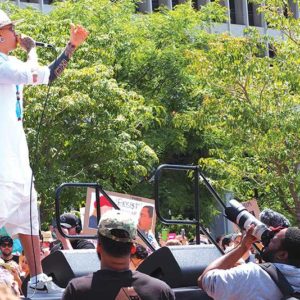 The concert will take place at 6 p.m. on the stage next to the Spring Street steps of City Hall, located at 200 N. Spring St.

O’Farrell, joined by the Los Angeles City/County Native American Indian Commission as co-collaborators on the event, wants to use this platform to highlight the importance of recognizing the replacement of Columbus Day with Indigenous Peoples Day in the city of Los Angeles and nationwide.

“The addition of the Black Eyed Peas will help amplify the message to other municipalities across the country that replacing Columbus Day with Indigenous Peoples Day is essential if we are to ever eliminate the false narrative that Christopher Columbus discovered America,” O’Farrell, 13th District, said. “I am grateful for the partnerships, as well as the opportunity to unite Angelenos and possibly take this movement to the next level by inspiring an entire country to effect change in their communities.”

“Our people finally have space to honor our ancestors and celebrate our heritage,” said Jamie Luis Gomez, better known as Taboo of the hip-hop group Black Eyed Peas, who is of Shoshone and Hopi heritage. “It’s an honor to lend the group’s support of this historic occasion for Los Angeles, and I want to thank Pat Vegas of Redbone for the opportunity to collaborate on the event.”

The event is being billed as one of the largest Indigenous Peoples Day events in the country, with a Facebook event page that has received thousands of responses from people planning to attend.

“This event will celebrate unity and love within our community of Los Angeles and I can’t wait to share this message alongside the Black Eyed Peas,” said Vegas, who will be joined on stage by his son, P.J. Vegas. “We can’t wait to keep the message of ‘love and music’ alive on stage on Oct. 8.”

Both Grand Park and City Hall public spaces will be used for other activities planned throughout the day, including a sunrise ceremony, 5K run, parade of nations, Native American PowWow, panel sessions on trending topics related to Native Americans and the community and a fashion show.

Other musical performances throughout the day will include artists Jessa Calderon, Artson, Cody Blackbird Band, Drezus and Mato Wayuhi.

O’Farrell, a member of the Wyandotte Nation, led the initiative to replace Columbus Day with Indigenous Peoples Day during his first term in office. After numerous hearings with members of both the Native American and Italian-American communities, the City Council voted in August 2017 to establish Indigenous Peoples Day as the second Monday in October.