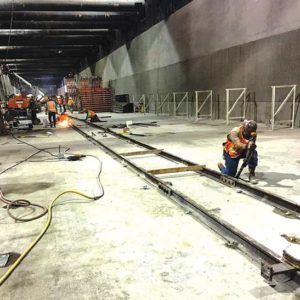 During the Oct. 9 City Council meeting, some parents compared the Metro construction health risks to the cases of cancer in former Beverly Hills High School students who alleged the oil wells run by Venoco were to blame. No conclusive link was ever established. But several parents told council members that they intend to send their children to other high schools to avoid Beverly Hills High during construction.

Beverly Hills High School students have planned a walkout on Friday in protest of Metro’s tunnel alignment for the Purple Line Extension project.

“I hope each one of the city council members will join us on Friday,” said Marvin Winans Jr., a parent in the district and candidate for school board in next month’s election, “and see this as an opportunity to prove how much you care.”

The demonstration will take place on Oct. 12 at 10:30 a.m. at Will Rogers Memorial Park on Sunset Boulevard. At a school board meeting earlier in the day, student school board member Sean Toobi asked the community for its support on Friday. Beverly Hills students from grades 3-12 are allowed to attend.

“This is an opportunity we have been looking forward to for a very long time,” he said. “It’s finally a time for all of us – and by us I mean students, staff, teachers, parents and everyone in this community – to put everything aside and focus on the one common goal that we have. That the cornerstone of our community is the school district and safeguarding the health, safety and education of our school district should be of No. 1 priority.”

The city of Beverly Hills fought the tunnel alignment in state and federal court. U.S. District Court Judge George Wu ordered Metro to redo parts of an environmental impact report it had submitted, but the agency’s plans to tunnel under the high school remained intact.

Students and district officials have said they’re worried about Metro coming into contact with any of the 70-80 abandoned oil wells and the potential hazards of methane gas and hydrogen sulfides released. Metro has repeatedly said it would not have undertaken the extension under the high school if it put students, faculty and other district personnel in danger.

Beverly Hills Mayor Julian Gold said the city is committed to working with Metro to mitigate the noise, vibration and other potential disruptions from construction.

The mayor added that the city “does not have a legal posture here to change the route, that’s something the court has already decided.”

The two sides are still working to finalize a memorandum of agreement. Several weeks ago, Beverly Hills Unified School District Superintendent Michael Bregy and district counsel Terry Tao told council members that they were satisfied with the protections it would offer the school district.

Purple Line Extension construction has made its way down Wilshire Boulevard within close proximity to many businesses and residences in L.A. and Beverly Hills. Gold said the construction will “create challenge” for the school district as well as other parts of town, and that the city will continue a “robust monitoring.”

“We appreciate everyone’s passion around this issue,” he said.