It’s been eight months since Democratic Congressional Campaign Committee officials announced an ambitious plan to target 101 House seats in the Nov. 6 election, but needing only 23 to reclaim the majority. 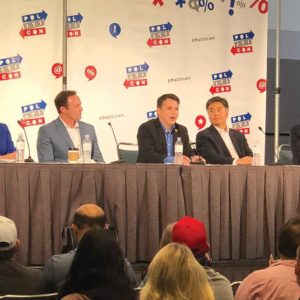 “When we announced that, folks thought we were crazy, and then we won the Conor Lamb district in Western Pennsylvania,” said U.S. Rep. Ted Lieu (D-Torrance), a DCCC regional vice chair.

Lamb, a Democrat, prevailed by less than 1 percent in a special election last spring to fill Pennsylvania’s 18th Congressional District seat over his Republican opponent. The seat had been left vacant following the resignation of Republican Tim Murphy.

Democrats hope it’s a harbinger for a “blue wave” on Election Day. Lieu joined U.S. Reps. Judy Chu (D-Monterey Park), Brendan Boyle (D-Pa.), and former Reps. David Jolly, who was a Republican during his time in office, and Patrick Murphy, a Democrat, both of Florida, for a panel discussion at Politicon last weekend in the L.A. Convention Center about the Democrats’ final push to take back the House.

Despite the sense of optimism the party has, based in part on President Trump’s perpetually low approval ratings, Lieu said there are plenty of seats that could go either way.

“It will be very, very close and we won’t know until November,” he said.

The congressman mentioned the Florida race for governor, in which Democrat Andrew Gillam’s lackluster polling leading up to his party’s August primary failed to capture segments of the electorate who propelled him to victory. Now he’s competing with Republican Ron DeSantis in the general election.

“All these polls didn’t take into account the minorities, young people that showed up who they were not tracking in these polls,” Lieu said. “If that happens again, Democrats sweep. If it doesn’t happen, Republicans could continue to control the House.”

A few seats Democrats hope to claim after Nov. 6 are in Orange County, which has typically been a Republican stronghold but went for Hillary Clinton in 2016. California’s top-two primary system, however, in which the top two candidates in a primary advance to the general election regardless of party affiliation, created the possibility that no Democrats would be on the ballot next month in winnable Orange County House races. In one of them, the 48th Congressional District led by Rep. Dana Rohrabacher, the DCCC made the unorthodox decision to spend nearly $140,000 in support of one of Rohrabacher’s Republican primary challengers, John Gabbard. With Rohrabacher projected to comfortably finish first in the June primary, it was an apparent effort to divert votes away from another Republican challenger, Scott Baugh, who was more of a threat to finish second, eliminating any Democratic challengers.

In a Q&A with Rolling Stone magazine, Lieu said Rohrabacher is a “very weak incumbent,” and the opportunity for Democrats to run against him on Nov. 6 “might not have happened” without the DCCC’s spending strategy.

Chu said she thinks “women are going to be at the center of the votes that will let us take back the majority.” She cited Los Angeles Times polling that has shown growing Democratic support among women, including white women who have typically represented a formidable segment of the GOP base.

“Women are going to the Democrats in large, large margins,” she said.

Jolly, who announced last month that he’s no longer a member of the Republican Party, underscored the uncertainty of what will happen after Election Day.

“We all bring our own passions to this issue,” he said. “We prognosticate if there’s going to be a blue wave or not, and I tend to think there will be. At the same time, just because you think there might be a blue wave, you can’t ignore that there are passions on the right, including among white Republican women.”