‘Bad Times at the El Royale’ is a rough go for seven strangers, but not audiences

Drew Goddard is the filmmaker to watch. From his directorial debut in “The Cabin in the Woods” to an Oscar-nominated screenplay for “The Martian,” he’s a master of overloading stories with subplots and supporting characters, all worth each moment on screen. And his sophomore film “Bad Times at the El Royale” proves he won’t rinse and repeat anything from his rich résumé, especially his countless TV credits (“Buffy the Vampire Slayer,” “Daredevil,” “Lost”). 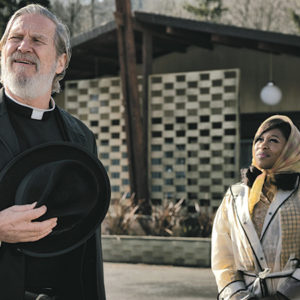 “Bad Times” is a Tarantino flick without the bourgeois baggage, a non-linear black comedy, complete with clearly labeled chapter breaks, but modest in its overall scope. It starts like a bad joke when a priest, Father Flynn (Jeff Bridges), and a Reno-bound singer, Darlene Sweet (Cynthia Erivo from the upcoming “Widows”), meet on the border of Nevada and California at the El Royale, a once-great establishment with rooms in both states. Apparently, the Golden State side runs $1 more because “it’s in California,” says El Royale’s only employee Miles (Lewis Pullman), who has his own secrets as well.

We soon meet obnoxious vacuum seller Laramie Seymour Sullivan (Jon Hamm) and hippy Emily Summerspring (Dakota Johnson). And when the bad times are in full swing, we also meet Rose (Cailee Spaeny from “Pacific Rim: Uprising”) and the film’s primary villain, Billy Lee (Chris Hemsworth), who arrives to show off those insane abs that match the insanity his cultic personality evokes in his followers. Think Charles Manson as a flower child … with legendary abs. But this story isn’t about a central villain but seven folks’ backstories, complete with origins to flesh out every major player. No character goes unnoticed.

This is both a strength and weakness. On page, jumping from character to character – witnessing storylines that coincide with others, while enjoying flashbacks Goddard clearly practiced during his tenure on “Lost” – makes sense. In the film itself, the result is a bit clunky, repetitive at times, overly telegraphing chronological connections to ensure audiences can track all the subplots. It’s a nice gesture but unnecessary. A film like “Bad Times” doesn’t attract general audiences; this is the providence of cinephiles literate in the weirdest, most obscure contributions to celluloid history.

The promise of “Bad Times” as a neo-noir thriller, and Hemsworth’s peculiar dance moves, imply something a bit more out there. Goddard delivers, to a degree, but this feels like a subdued draft of a much more obscure experience. That’s where Goddard is headed, and once that happens, another cult classic is sure to follow (“Cabin” is the first real hit).

This all shouldn’t discount how entertaining and original “Bad Times” truly is. Start to finish, nothing lags, and no character feels out of place. And we can’t ignore Nick Offerman’s cameo (mum’s the word on what and who).

As for the other performers, Hemsworth as a cult leader is new territory for the man living all our best lives. This proves he can do more than simply smile his way through a role (that’s not a dig; he’s splendid as Thor, and he’s just really charming). Bridges as a priest with a complicated past is hardly a surprise, but he does this gig right.

Erivo best blow up after her crowning achievement here. As the only virtuous character in sight, Erivo’s Darlene easily goes unmentioned. That’s a mistake. She doesn’t need Johnson’s southern accent or Hamm’s hammed up persona. She’s incredible without the caricaturization. And her chemistry in scenes with Bridges is dynamite, especially when the two share a brilliant musical scene.

“Bad Times at the El Royale” is a summer palette cleanser, a violent and complex reminder that films can still do something new. It won’t win any awards or be remembered as the year’s best, but it’s a satisfying way to spend a couple hours, and an important stepping stone for a director on the rise.­