Detectives in West Hollywood arrested two suspects on Sept. 27 who police believe are responsible for a series of auto burglaries in the city and surrounding area. 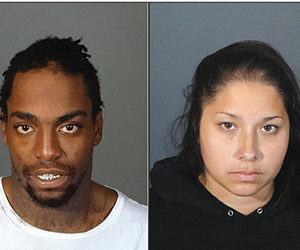 Joseph McWoodson and Desiree Hernandez are facing auto burglary charges for break-ins that allegedly occurred in West Hollywood. (photo courtesy of the LASD)

The arrests were made shortly before midnight during an undercover operation aimed at reducing car break-ins in West Hollywood. The suspects, Joseph McWoodson, 32, and Desiree Hernandez, 29, are residents of Oakland.

The pair is being investigated as members of a Bay Area auto burglary ring that travels throughout the state to commit vehicle burglaries, said Det. John Gaudino, of the West Hollywood Sheriff’s Station. McWoodson was previously arrested on Aug. 3 in Beverly Hills for auto burglary, but had been released on bail. Gaudino did not know how long the pair had been in the Los Angeles area.

After his arrest on Sept. 27, McWoodson is facing new vehicle burglary and possession of stolen property charges and is being held on $340,000 bail. He is expected to be arraigned today.  Hernandez is also facing vehicle burglary charges. She was held on $20,000 bail pending a court hearing on Oct. 10.

Gaudino said deputies were conducting an overnight undercover operation on Sept. 27 when a caller reported that a man was attempting to break in to a vehicle parked near Melrose Avenue and Robertson Boulevard. Deputies and investigators were already in the neighborhood and headed to the intersection.

They saw McWoodson, who was on foot, allegedly burglarize two vehicles parked along Melrose Avenue east of Doheny Drive. He then allegedly handed property to Hernandez, who was in a rented black, late model Hyundai. Hernandez drove west on Melrose Avenue and deputies pulled her over a short distance away. McWoodson tried to flee on foot but was arrested minutes later.

Guadino said investigators found stolen property in the vehicle, and later during a search of the pair’s hotel room, that they believe was taken during the auto burglaries on Sept. 27, and possibly in other earlier break-ins. Laptops, cell phones, electronic devices, jewelry, wallets and luxury women’s purses and handbags were recovered. The stolen property was valued at $15,000 to $20,000.

“It was all sorts of stuff,” Gaudino said. “We have already ID’d some of the property and victims from a few burglaries that night. We are looking at reports to cross-check to see whether we can ID more victims.”

The detective said “it is hard to say” how many auto burglaries may be tied to the suspects. Detectives in West Hollywood are working with their counterparts in the Los Angeles and Beverly Hills police departments to identify additional break-ins.

“There are a lot of moving parts to this case and we are taking it one piece at a time,” Gaudino said.

Anyone with information is urged to contact investigators with the West Hollywood Sheriff’s Station at (310)855-8850.