In a last ditch effort to prevent the Purple Line Extension from tunneling under Beverly Hills High School, students are hoping President Trump heard their calls to stop the project during a protest at Will Rogers Memorial Park on Oct. 12. 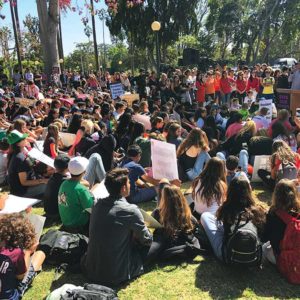 The Los Angeles Metropolitan Transportation Authority’s tunnel alignment under the high school has withstood multiple legal challenges from the city and school district over the past several years. The Beverly Hills City Council has turned its attention toward finalizing a memorandum of agreement with Metro over the monitoring and mitigation measures to be in place as construction goes through the city. There has been no indication so far that Trump would consider halting the project, or that he’s even aware of it.

“We have an opportunity to stand up for each others’ safety and well-being,” seniors Sean Toobi, student school board member, and Ryan Abrishami, president of Beverly Hills High School’s Associated Student Body, said during a joint speech. “We have an obligation to put aside our differences and stand together behind this common goal.”

Students billed last Friday’s event as a “walkout,” although they had to submit permission slips signed by their parents to attend. The gathering was sanctioned by Beverly Hills police and district administration, which gave students guidelines for what to write on their signs and social media hashtags to use.

Parents, teachers and students from grades 3-12 were in attendance, many with signs reading “Save Our School,” “Save Our Students,” “Move Over Metro,” “President Trump, You Can Fix It” and “Health and Safety First.”

Students also called on U.S. Rep. Ted Lieu (D-Torrance), whose district includes Beverly Hills, to intervene. A spokeswoman for Lieu did not respond to a request for comment.

Students, school board members and other district personnel have said air pollution and abandoned oil wells under the campus pose health and safety risks to students. Metro has repeatedly said it would not have undertaken the project if it put anyone in danger.

“Safety is our No. 1 priority, and we would not build a project that would jeopardize anyone’s safety,” read a statement from Metro spokesman Dave Sotero. “That’s why Metro conducted a thorough, five-year environmental study for the project that has been certified by the federal government and upheld in state court. We also conducted a supplemental environmental report to address specific concerns raised by Beverly Hills High School. These publicly available studies provide detailed information about our selected alignment, underground conditions, noise, dust and health-related mitigations. Metro has undertaken all possible planning and will implement all feasible mitigation measures to avoid impacting Beverly Hills High School during our construction work.”

According to a cancer risk assessment for diesel particulate and nitrogen dioxide mentioned in the environmental impact report, the excess cancer risk did not exceed the South Coast Air Quality Management District’s threshold of 10 in one million, according to projections based on 225 school days per year and 12 hours per day of exposure over five years.

The report also explains that the tunnel alignment was chosen to avoid earthquake fault zones, and provides Metro’s plans for navigating methane and hydrogen sulfide.

The report states that the tunnel “will have no influence on the long-term migration of soil gas to the ground surface or into buildings or increase the risk of explosion, resulting in no adverse effect.”

Clues sought in murder of Homeless man in Hollywood

The last straw for polluting plastics