A few residents of the AKA West Hollywood on the Sunset Strip said that the property’s flexible leasing options have allowed them to make the city their home when work or travel prevents them from being able to commit to a long-term lease. 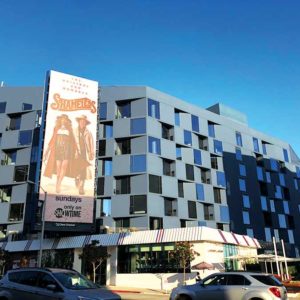 The AKA West Hollywood at 8500 Sunset Blvd. comprises an east tower (pictured) and a west tower. (photo by Luke Harold)

But the West Hollywood City Council last week ruled that the property’s operator, Korman Communities, was renting units in a manner similar to a hotel as opposed to offering long-term residential units that the development agreement for the property calls for.

The appellants, Korman Communities and property owner BPREP 8500 Sunset LLC, argued that their rental terms were consistent with the development agreement. In April, the city’s Planning Commission ruled that units in the property’s west tower were being rented as hotel rooms and not as long-term units, violating project approvals. City staff said AKA West Hollywood has advertised nightly rates and marketed itself in other ways similar to hotels, and guests can earn hotel points by staying there.

“They used words like ‘book your room with us,’ ‘reserve here,’” Councilwoman Lauren Meister said. “Those are hotel terms. This is using what was supposed to be residential units for commercial use.”

She, along with council members John Heilman and Lindsey Horvath, rejected their appeal.

William Delvac, a legal representative of the appellants, said all leases at the property are for at least one month, meeting the city’s requirement.

“If a dwelling unit is one month or longer, we’re in compliance with all those documents and agreements,” he said.

Mayor John Duran and Mayor Pro Tempore John D’Amico voted in favor of granting the appeal. D’Amico said the property’s luxury units would not necessarily contribute to the city’s housing stock if they were made available to long-term residents.

“We know that people live on our streets because they can’t afford housing and they live in their cars because they can’t afford housing,” he said. “They can’t even sign a one-day lease at a hotel, let alone a one-year lease in an apartment. So I don’t actually believe that this discussion is about our housing crisis. This discussion is about our feelings being hurt because the developer wants to do something that we didn’t contemplate.”

Duran said the city is “stuck in trying to either put this business model into either apartment or hotel.”

“[We’re] completely eliminating the possibility that in today’s economy, in today’s shared resources, that there are hybrids in between and they are the markets of the future,” he added.