Celebrate the best of the Miracle Mile at this weekend’s Tarfest. The free family-friendly music and arts festival, returns to the La Brea Tar Pits in Hancock Park on Saturday, Sept. 22, from 1 to 7:30 p.m. for its 16th year of celebrating the community and showcasing emerging artists and musicians. 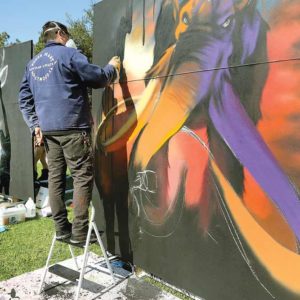 “The festival is about exposing artists to the community and the community to the artists,” said Steve Kramer, the president of the Greater Miracle Mile Chamber of Commerce, which supports the event.

Gourmet food trucks such as Baby’s Badass Burgers, Meat the Greek, Rice Balls of Fire, The Deli Doctor, Jeni’s Splendid Ice Cream and more will offer their fare for festival-goers. For attendees 21 years and older, Lagunitas Beer will host a biergarten with cocktails too, including a special drink by Tito’s Handmade Vodka.

Tarfest 2018 will also feature Tobi Lynn of Alt 98.7 anchoring a roster of local musical talent, with the husband-and-wife duo Freedom Fry headlining the festival with their alternative folk sounds. Other acts include indie-pop group Wild, the electronic-soul band Caught a Ghost, Smoke Season with its indie dance music, and the alternative pop singer and songwriter Jane Holiday.

This Saturday’s Tarfest will be bustling with crowds, activities and entertainment, but the festival has relatively humble beginnings. James Panozzo, founder and executive director of LAUNCH LA, founded Tarfest nearly two decades ago just to gather his friends and “activitate” Hancock Park, which he felt was underutilized, with rising artists.

“I had just returned from living in New York, and 16 years ago, there wasn’t as much happening in the Miracle Mile,” Panozzo said. “I just decided to create the day so friends could share their creations and throw a party in the name of celebrating the arts.”

This year, Panozzo, to remain true to his mission of highlighting local artists, enlisted Allison Shaw, of Manic Monkee Management, to curate the musical lineup for Tarfest. As Shaw explained, she let the music, rather than any band’s reputation, guide her.

“When planning Tarfest, we said, ‘Let’s do a music discovery,’ and so this was a lot of new music for me too,” Shaw said. “When looking for bands, we also had to consider that the event is kid-friendly, and it’s about the arts, it’s about LAUNCH LA … But it wasn’t important that the bands be ones that everyone knows or that no one knows.

“They just have such great sounds,” she added.

Both Kramer and Panozzo emphasized that the day has a more “laid-back feel.” Kramer, for instance, said he is looking forward to simply spending the Saturday in the park and watching families and friends participating in this year’s arts activities.

“Tarfest is in its 16th year, which is a testament to the festival. There’s now even more involvement from museums and cultural institutions in the area,” Kramer said, noting the support from major institutes such as the Petersen Automotive Museum and the Los Angeles County Museum of Art, among others.

After about five months of planning, Panozzo will also be savoring the relaxed atmosphere of the festival. He noted he is especially eager to see what Tempo and Crawford create in the live painting demonstrations.

“I take a great deal of pride in people discovering a new band or artist – people expanding their horizons,” Panozzo said. “Every year has a different personality, but the festival above all is primarily for the community and getting people out in this wonderful green space, sharing each other’s company.”

Rent control is not the answer for Beverly Hills