The removal of 18 full-grown ficus trees along Cherokee Avenue in Hollywood remains on hold as a civil lawsuit filed by United Neighborhoods for Los Angeles moves through the court system. 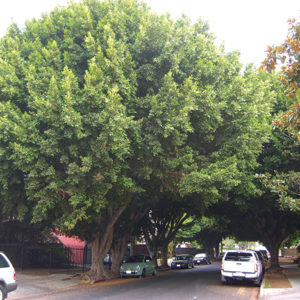 Eighteen ficus trees on Cherokee Avenue were scheduled for removal. The city is awaiting the outcome of legal proceedings to move forward. (photo by Edwin Folven)

A mediation hearing was held on Sept. 25 but yielded no significant breakthroughs on ways to preserve the trees, said Grace Yoo, an attorney and board member for United Neighborhoods for Los Angeles, which filed the lawsuit. The next step is for a Los Angeles Superior Court judge to consider the suit on Oct. 16.

The city planned to remove the trees on Cherokee Avenue between Sunset Boulevard and Fountain Avenue, and other trees in a project in South Los Angeles, because their roots damaged adjacent sidewalks. United Neighborhoods for Los Angeles’ lawsuit challenges the city’s Safe Sidewalks LA program, a 30-year, $1.4 billion plan to fix damaged sidewalks. The plaintiff is asking that alternatives to sidewalk repairs be considered before the city systematically removes trees.

In August, the city put the tree removal projects on hold pending further review by the court. United Neighborhoods for Los Angeles wants an environmental impact report to be completed for the city’s Safe Sidewalks LA program.

“L.A.’s urban forest is declining,” said Casey Maddren, president of United Neighborhoods for Los Angeles. “Our point is yes, repair the sidewalks, but do an EIR so you can look at alternatives.”

Paul Gomez, a spokesman for the Los Angeles Bureau of Public Works, confirmed the tree removal is still on hold.

“Pending a court ruling, there will be no tree removals,” Gomez said. “The city continues to maintain that for the safety of pedestrians, these trees must be removed as part of the sidewalk repair.”

United Neighborhoods for Los Angeles wants the city to consider alternatives such as ramping – meaning ramping up and down over tree roots – and building sidewalks around roots so trees can be preserved. The city contends the sidewalks need to be replaced to meet American with Disabilities Act requirements that stipulate wheelchairs must have four feet of room to travel along sidewalks.

“When the Urban Forestry Department first told my office that 18 trees had to be removed on Cherokee Avenue to repair the sidewalk, I urged the department to take a second look to see if any of the trees could be spared and the sidewalk repaired and made safe,” Ryu said. “I cannot comment directly on this case given active litigation, but can say that I will continue to seek creative and comprehensive solutions on how to repair our sidewalks without decimating our urban canopy. Especially now, after one of Los Angeles’ hottest summers on record, we need our most effective climate tools – our trees – more than ever.”

The Urban Forestry Department determined that because the trees are so large and are close to private property lines, there are no ways to fix the sidewalks so they are wide enough for wheelchair access. The Board of Public Works commissioners previously approved the removal. The city plans to replace the ficuses with 36 pink trumpet trees.

“The next step is to go before a judge,” Yoo added. “We want to make sure every effort to save these trees is made.”

French Market has a place in new project