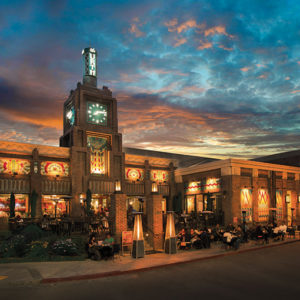 Today a national historic site, California historical landmark and a California state park, the Adamson House was built in 1929 in the popular Spanish Colonial Revival style of the time. Tilework featured throughout was produced by Malibu Potteries, founded in 1926 by May Rindge, Rhoda Adamson’s mother, who discovered an abundance of buff and red clay on her property.

The Berkmans’ architect referred them to Desmond and Sean McLean, brother co-owners of California Pottery and Tile Works, established in 1994 to continue the rich tradition of California tile making and decoration of the early 20th century to meet the needs of today’s architectural, design and building industries. 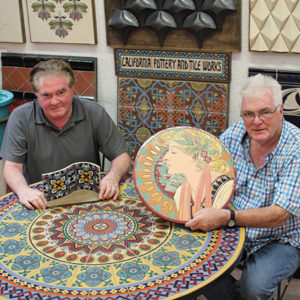 “We were so impressed when we went to their factory in 2002,” Shallom Berkman recalled. “As they showed us around, they told us, ‘We make everything custom here.’ It’s great to go to the factory, see all the clay being formed into tile shapes, the artists drawing and silk-screening designs and then hand-glazing them before they are fired in the kilns.”

CalPot custom-made fountains and tiles were used for the Santa Monica café’s patio, and that began a creative collaboration that continues today. CalPot has created Jilla Berkman’s tile visions for each Urth Caffé, as well as for the couple’s 1917 Spanish Revival home.

Each Urth has its signature architectural era. For example, the downtown Los Angeles café, located in a century-old building, is strongly Art Deco. The Pasadena location’s Spanish Revival design is an homage to the city’s architectural heritage with tiles sparkling with 24-karat gold glaze.

“People tell us they were so happy we restored an historic building,” Shallom Berkman said of the Colorado Boulevard location. “What they don’t know is that we built it from the ground up. It fits in so well with the surrounding buildings, and it’s built to last forever.”

Las Vegas hotel developer Steve Wynn was so awed by the Pasadena café that he invited the Berkmans to build an Urth Caffé in his new Wynn Esplanade of luxury shops.

“And it’s in the lease agreement that we had to match the same quality of tile that CalPot made for Pasadena,” Shallom Berkman said. He calls the restaurant’s focal point, a fountain and matching skylight that has just been installed, “Jilla’s masterpiece.” 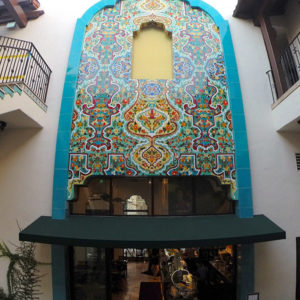 The motif for Urth Caffé in Pasadena, left, is Spanish Revival. (Photo courtesy of Cal Pot)

“The best aspect of working with Sean and Desmond is they encourage creativity and welcome challenges. They basically want you to go wild with your imagination,” he said. “There is no one doing what they do in the traditional, hand-made way. We’ve never been able to find anyone else who does what they do.”

The Adamson House also inspired film producers Glenn and Debra Gainor when they started to remodel their 1925 Hollywood Hills home in its Spanish style. That led them to CalPot to create tile for the interior and exterior of the property.

“Once the house is complete, it will be amazing to see the finished product,” Debra Gainor said. “When people come over, they always talk about the tile. With all the work we’re doing, our home could become CalPot’s showroom.”

A big part of that “showroom” is the Gainors’ kitchen filled with CalPot custom tile on countertops, the wainscot and crown molding.

CalPot’s unique ability to curve tile to fit any angle is showcased in floral border tile wrapping around corners along the edge of countertops and the farmhouse sink.

“When we started talking with Sean and Des about what we liked for our kitchen, they helped us with the deco and subway tile. We chose bold, darker colors, colors of vegetables – greens, reds and yellows. And we ended up with this beautiful floral tile mural for the backsplash behind the stove,” she said.

“I appreciate that Sean and Des understand their customers’ wishes,” Glenn Gainor said. “They’re inspired by history with an eye on the future. They have a great sense of what came before them and are daring to do what can be done. They can create something that has never been seen before.”

New kid on the block: Welcome to the neighborhood, 6th and La Brea