‘The Predator’ guts a promising sequel yet again

How “Jurassic World” became the new standard for breathing new life into a franchise is beyond me. Dumb science explanations, characters acting stupid, haphazard mayhem, ineffective soldiers hitting nothing but air, big special effects budget, a grandiose showdown unencumbered by pathos. “The Predator” is the kind of missed opportunity we’ve seen far too many times before. 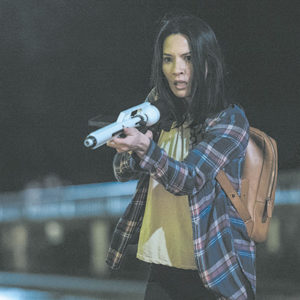 Olivia Munn portrays scientist Casey Bracket in “The Predator,” the latest film in the franchise based on the 1987 film “Predator.” (photo courtesy of 20th Century Fox)

Rather than embrace the horror thrills of its past namesakes, “The Predator” recycles generic plot devices, much like most of the sixth films with “Predator” in the title. None come close to the 1987 masterpiece “Predator” despite the recognizable branding and incredible monster design of the titular character, whom actress Olivia Munn’s scientist Casey Bracket discovers is not actually a predator but a sport hunter. Thanks for that tidbit. This is Han Solo’s surname origin all over again.

Instead of a true wilderness thriller, we experience another attempt at depicting rural America. It didn’t work for “Alien vs. Predator: Requiem,” but why not, how bad can it get? Let’s blow through these details quickly. A predator crash lands, ending up in a secret facility sedated. That doesn’t take. So military hero Quinn McKenna (Boyd Holbrook) and a band of disgraced soldiers attempt to take him down with the help of Bracket and Quinn’s son Rory (Jacob Tremblay from 2015’s “Room”), whose autism plays a central role in the story.

“Predator” was a horror movie; “The Predator” should be one too. Certainly, a franchise needs replication of what came before. “Aliens” effectively expanded on the first film without jumping ship. What transpires here is jumbled. It’s not unwatchable, just predictable, stock, loud, dumb. 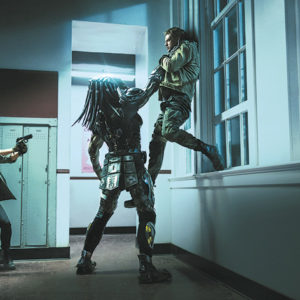 Boyd Holbrook, as Quinn McKenna, battles the Predator in the latest film in the series. (photo courtesy of 20th Century Fox)

Some of the cast have chemistry, like Baxley (Thomas Jane) and BFF Coyle (Keegan-Michael Key of “Key and Peele” fame), whose time in the trenches bonds them. And there’s Trevante Rhodes, as Nebraska Williams, in his most high-profile film since best pic winner “Moonlight.” He goes rather unused here. But the biggest disappointment is Sterling K. Brown (“This Is Us”) as shady agent Traeger, villainous in a more obnoxious than charming way.

The most frustrating aspect of this film is the enormous pool of talent drowning in dull scenarios, building to the last 20 minutes, only to watch them dispatched with little care. The brilliance of “Predator” is how everything unravels organically. Each death matters, building on the anxiety of the military unit’s dire situation. “The Predator” cares more about obligatory world building in service of a new slate of films to come.

And let’s not forget the horrifying circus surrounding the casting of a registered sex offender in the film, who had been brought up on charges in 2010 for assaulting a 14-year-old girl, for a scene removed just before the premiere (I refuse to name the actor). Even worse, director Shane Black knew this and cast him as a favor. Once Munn learned the truth, she did the right thing, went public and the majority of the men in the film went radio silent. What a mess. What a disgrace.

I loathe the idea of giving up on a franchise. I remain the eternal optimist, always hoping the next sequel will be better than the first. I’m wrong a lot. And the “Predator” franchise seems cursed at this point, with only two good films to date (“Predators” is the other favorable one). So rather than give up hope, perhaps we just need the right director for the job, one willing to pay homage to the best parts of the original – more than merely repeating the line “get to the chopper” – and, ya know, not cast vile people in the film. Do better Fox.

Citizen is solid in Beverly Hills