Mayor Eric Garcetti announced on Sept. 15 that SwimLA, an initiative to double the number of young people who receive swimming lessons at city pools, has surpassed its goal of enrolling more than 36,000 Angelenos in classes this year. 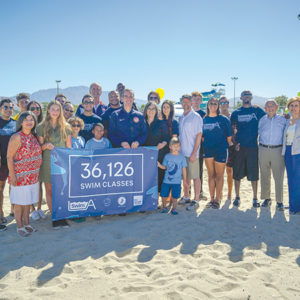 “The 2028 Olympic and Paralympic Games may be a decade away, but our journey to make L.A. the healthiest city in America has already begun,” Garcetti said. “SwimLA is making incredible progress toward our ultimate goal: equal access to sports and recreation for all young Angelenos, no matter their zip code or family income, so that kids in every community can have an opportunity to be fit, stay active and know the joy of competition and achievement.”

Garcetti launched SwimLA in June to help ensure that young people ages 4-17 have more opportunities to learn how to swim. With support from partners, the program granted thousands of scholarships to families who demonstrated financial need. To accommodate the additional lessons, the Los Angeles Department of Recreation and Parks expanded hours at nearly 50 pools.

Of the 36,126 Angelenos who have participated in the program, 60 percent enrolled in the preschool and beginner level aquatics programs. SwimLA programming is available at every city pool, including the Hollywood and Pan Pacific Park pools.