Motorists are being asked to be patient as a sidewalk and street improvement project occurs through Oct. 5 at the intersection of Cahuenga Boulevard and Selma Avenue in Hollywood. 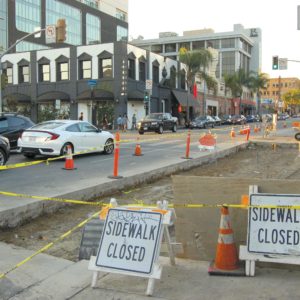 Drivers should plan for traffic delays on Cahuenga Boulevard near Selma Avenue during a sidewalk and street improvement project that began on Tuesday. (photo by Edwin Folven)

The Safe Routes to School project includes the replacement of sidewalks, curbs, gutters and portions of the street on both sides of Cahuenga Boulevard at Selma Avenue. Curb extensions known as bulb-outs will be installed, reducing the distance between corners, and new striped continental crosswalks will be created at the intersection.

“The goal of the project is to make this a safer corridor for people – particularly children and families – in the area,” said Dan Halden, Hollywood field deputy for Councilman Mitch O’Farrell, 13th District.

The project is three blocks east of Selma Avenue Elementary School and within walking distance of Hollywood High School, where a similar project was completed last year at the intersection of Selma and Highland avenues. The Safe Routes to School program is a partnership between the city and the Los Angeles Unified School District to ensure students can safely walk to and from campuses.

The work began on Sept. 11 with a full closure of Selma Avenue east of the intersection. Northbound Cahuenga Boulevard was also reduced to one lane. Westbound motorists on Selma Avenue are being diverted to Ivar Avenue, and eastbound drivers are required to turn on Cahuenga Boulevard. That portion of the project is anticipated to last through Sept. 21.

Luis Perez, project manager for Comet Electric Inc., the contractor for the project, said to expect traffic delays around the intersection.

“It’s going to be inconvenient. There are no two ways about it,” Perez said. “We will do our best to keep it as low impact as possible.”

The work will occur from 7 a.m. to 5 p.m. Traffic cones, signs and a temporary electric sign warning drivers about lane reductions will be used. Pedestrian access will be maintained for businesses in the area but parking will be restricted in and around the construction zone.

Kerry Morrison, executive director of the Hollywood Property Owners Alliance, which administers the Hollywood Business Improvement District, said business owners in the area have been receptive to the project. She added that the improvements are important for safety.

“Selma is a very heavily traveled street for pedestrians,” Morrison said. “They are taking an opportunity to make pedestrian improvements, tighten up the intersection and make it more easily passable. I think everyone understands that the benefits this will bring will be good for the long run.”

Prior to construction, O’Farrell’s staff and representatives of the contractor met with businesses in the surrounding area. Leron Gubler, president and CEO of the Hollywood Chamber of Commerce, also said the project will be beneficial.

“This is a very important improvement project for the neighborhood,” Gubler added. “Selma Avenue Elementary is located in the heart of downtown Hollywood. There is a lot of traffic that uses Selma and several new projects under construction along the corridor which will add to the vehicular traffic. This is a good example of the city being proactive to provide a safer environment for the students and their families. We commend Councilmember O’Farrell and the city for making these improvements.”