They say Chinese restaurants are busiest on Christmas Eve and Christmas Day. Just ask Vicky Mense, owner of Xi’an in Beverly Hills. She has been successfully operating her fine Chinese cuisine restaurant on Canon Drive for 22 years. However, she’s not just busy on the 24th and 25th, she’s booked solid all year long. 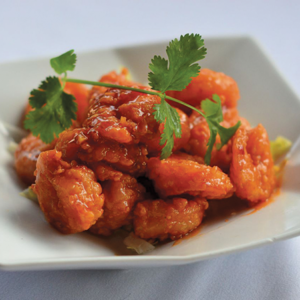 Mense and her restaurant manager, Cece Tsou, have built the business together. They met on the tennis court where Tsou was Mense’s instructor. Both physically fit, they took their “go get ‘em” attitude from the court to the kitchen, with Mense creating a diverse menu and Tsou managing the staff.

Key to her success, Mense said, is to keep evolving and adapting to changing trends and to specific clientele. Mense caters to her kosher customers by ordering separate meats and oils, and she caters to her traditional Chinese visitors by offering a special menu with dishes from the mainland.

She is also health conscious, telling her Chinese chefs to use only a minimal amount of oil for wok cooking. Tsou said the chefs must work very fast to ensure the food cooks thoroughly and doesn’t burn when such high heats are employed.

With more than 100 dishes offered on the menu, Mense refers to her cuisine as comfort food. While it is very comforting to dine at Xi’an, I found the tastes and textures of the ingredients to be sophisticated and top quality.

A group of us gathered around a table to taste a variety of dishes. We were joined by Mense and Tsou, who guided us through the menu and regaled us with interesting and amusing stories about their 22 years in business. Tsou told us she nearly married someone with the American last name Maine. Thankfully she didn’t, she said, or she would have been Cece Tsou Maine (Chow Mein!) Now she has a 16-year-old son, Zane, and a partner for the last eight years.

Mense has been married for 42 years, has a son and a daughter, and loves to travel. Her baby, however, is the restaurant.

She suggested the temple salad – “it’s a dish Buddha would eat.” Organic mixed greens, radicchio, edamame and water chestnuts are tossed in a light yuzu dressing.

The tofu salad is refreshing and cool, topped with an herb sauce of cilantro, scallions and ginger, much like an Asian chimichurri.

Chicken wontons are light and delicate in a smooth brown sauce. Crispy Brussels sprouts are topped with almonds, cilantro and a citrus vinaigrette.

These starter dishes were just a prelude to bigger flavors to come in the entrées.

We spooned poached cod filets in a spicy Asian broth over rice, however, it could also be eaten as a soup, as long as you like it “hot to trot.”

Sliced beef tenderloin with crispy spinach over rice noodles was tossed in a light teriyaki sauce. Twice-cooked pork belly was quickly fried, coated in brown sauce and flash fried again, making the pork crispy on the outside yet juicy inside.

With so many items on the menu, one could easily dine at Xi’an multiple times and try something new each visit. A full bar, wine and beer is available, as well as takeout. Be adventurous and ask for the Chinese menu. Or stick to your tried and true favorites. Either way, Xi’an, which has been satisfying palates in Beverly Hills for 22 years, will surely satisfy yours.

I have eaten at Xian many times over the last several years. The food and service are consistently excellent. I have never been disappointed with any dish I have ordered from their extensive menu. The service is always top notch. I would recommend Xian for any special occasion or just sometime when you want outstanding fresh Chinese cuisine.