The intersection of Melrose and La Brea avenues was designated Pink’s Square on Sept. 27, in recognition of the Pink’s Hot Dogs stand and its founders, Paul and Betty Pink. Councilman Paul Koretz, 5th District, authored a motion designating the intersection after the famous hot dog stand, which the Pink’s started in 1939 with a pushcart. The stand has served generations of hungry Angelenos and tourists. Signs were unveiled at each of the intersection’s four corners, and the signal poles were painted pink. 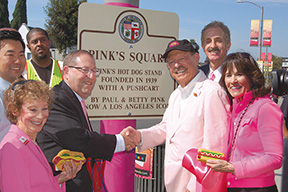 “This is all about the strong tradition of service at Pink’s and the hot dogs and good times, but it is also about preserving the memories of my parents,” said Richard Pink, who operates the stand with his sister Beverly and wife Gloria. “I want their memory to be preserved forever.”

To celebrate Pink’s Square and the stand’s 78 years in business, Pink’s offered its famous chili dogs and Patt Morrison Baja Vegan Dogs for 78 cents for 78 minutes, with all proceeds going to charity. Additionally, Pink’s plans to donate $7,800 to charity.

“It was a wonderful celebration that we will cherish forever,” Pink added.