Pink’s relishes its title as top dog in L.A.

Hollywood and Vine may be Tinseltown’s most famous intersection, but Melrose and La Brea signifies something far more tempting for the taste buds. 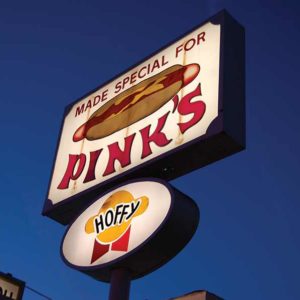 Earlier this year, the Los Angeles City Council voted to designate Melrose and La Brea as Pink’s Square after the iconic Pink’s Hot Dogs, located near the corner since 1939. Signs will recognize the hot dog stand and its late founders, Paul and Betty Pink, and the city and Pink’s Hot Dogs are planning a big celebration at the intersection on Sept. 27. It will be a fitting tribute to the “Little Hot Dog Stand That Could,” as Paul and Betty’s son Richard Pink calls it, signifying how ingenuity, hard work and a dedication to quality ingredients and service is a chili-topped recipe for success.

Pink’s is on many tourists’ must-see lists, and people from all over the world flock to the stand for its 40 varieties of hot dogs. It is also a favorite among locals and celebrities, who sometimes mingle in line waiting for their favorite creations. From the classic with mustard, chili and onions, to a bacon burrito dog, Philly cheesesteak dog or a spicy Polish sausage, Pink’s has a dog for everyone. Burger lovers also have it made with more than 10 varieties. The really adventurous can sink their teeth into JAWS, a Polish dog-hamburger combo with bacon, lettuce, tomatoes and mayo.

Pink, who operates the stand with his wife Gloria and sister Beverly, said while Pink’s is known for delicious food, just visiting is part of the fun. From joining fellow hot dog aficionados in line to hearing the grill sizzle and smelling the aroma of hot dogs cooking, the anticipation makes that first bite even better.

“Pink’s is more than just a hot dog stand, it’s an experience. It is intended to be special,” Pink said. “When you come to Pink’s, it’s one of a kind. We are proud to be part of the fabric of Los Angeles.” 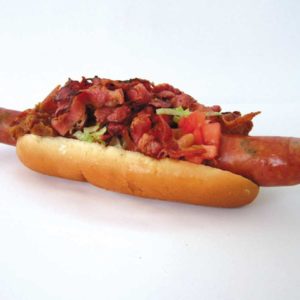 The America the Beautiful Dog is a 12-inch jalapeño dog topped with pastrami, bacon, lettuce and tomatoes. (photo courtesy of Pink’s)pink’s hot dogs

Paul and Betty Pink started with a pushcart at the corner in 1939 and in 1946 established the hot dog stand on La Brea that everyone knows and loves. The employees are part of the tradition, with many having worked at the stand for decades.

“I am proud of my parents’ legacy and the memory we have carried on,” Pink said. “We want to represent Los Angeles, because we are proud Angelenos.”

Part of that legacy is helping the community, and Pink’s proudly supports organizations such as the Special Olympics through its “Chili Dogs for Charity” program. Pink said giving back is a way of saying thank you to the city and people who have made the stand a success.

Pink’s now has 19 locations throughout the United States in California, Wisconsin, New York, Connecticut, Ohio, Florida and Hawaii, as well as three stands in the Philippines. Pink said branching out is also an important part of sharing the legacy, but he will only allow franchises far enough away that the La Brea Avenue location always remains a one-of-a-kind destination.

“It’s a Los Angeles landmark. It’s part of the legacy of L.A. The pop culture of L.A. includes Pink’s,” he added. “When people come to Pink’s, we want them to say, ‘Wow.’ After all, there is really nothing more American than a hot dog.”

Zombies, Ghouls, Diapers: How horror films prepared me for twins