Life in the Fast Lane: The Petersen puts patrons in the driver’s seat

Much like the mechanical masterpieces housed within, the Petersen Automotive Museum has a complex interior of many moving parts surrounded by a shiny, sleek exterior. 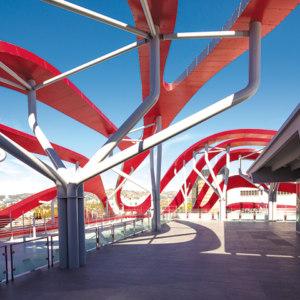 Since reopening in 2015 after undergoing a $90 million transformation, the museum’s attendance has skyrocketed, recently surpassing 4 million. In homage to founder Robert Petersen’s Hot Rod Magazine and the cars it features, the exterior was painted an eye-catching red and shiny stainless-steel ribbons were affixed. Like the curves and chrome of a custom street machine, the building has an aesthetic that is a tribute to the automobile.

“It embodies the essence and look of an automobile moving,” said Deputy Museum Director Michael Bodell. “We’ve seen an immediate impact with the public response. It’s driven by the elevated architecture of the building and the exhibits we’re are doing.”

The museum’s mission is to explore and present the history of the automobile and its global impact using Los Angeles as a prime example. It’s location at Wilshire Boulevard and Fairfax Avenue, one of the busiest crossroads in the city, places it at the heart of local automotive culture.

The museum is also an anchor for the Miracle Mile and its vibrant Museum Row, where it keeps company with the Los Angeles County Museum of Art, the La Brea Tar Pits and Museum, the Craft & Folk Art Museum, and soon, the Academy Museum. If location is everything, then the Petersen is in the driver’s seat.

The museum was founded in 1994 by publishing magnate Petersen and his wife Margie, who wanted a location to showcase rare and beautiful automobiles but also to educate people about the automotive industry, its history and milestones. The vehicles and exhibits were always displayed in context with automotive themes presenting a larger picture of how car culture evolved. The philosophy has now been taken to the next level, which follows a top-down approach – literally. Visitors begin on the third floor and work their way down through three levels of displays themed history, industry and artistry. 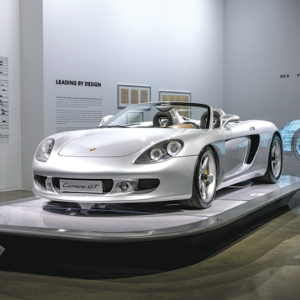 “The Porsche Effect” exhibit is on display until April. (photo courtesy of the Petersen Automotive Museum)

“On the third floor you go right from the Hollywood Gallery, where you see all these iconic cars, to an interactive display with a Model T. You can crank it, you can sit in it,” Bodell said, adding that there is plenty of opportunity for getting behind the wheel and for snapping pictures throughout the museum. “The lighting is set up for photography. Each car is spotlighted by six lights. You can share everything you are experiencing.”

Bodell added that the public response has been overwhelming, with a lot of positive feedback about the displays. Special exhibits have also been a driver for increased patronage, with the popular “Porsche Effect” and “The Roots of Monozukuri: Creative Spirit in Japanese Automaking,” running through next April and bringing new visitors to the museum. “Auto-Didactic: The Juxtapoz School,” an exhibit on how art influenced the customization of cars, is planned at the end of September.

Another gem of the Petersen Automotive Museum is its newly expanded Vault filled with hidden treasures not frequently displayed on the main levels of the building. Visitors can take 75-minute or two-hour tours (for an extra fee) and view 250 of the rarest vehicles in the world, such as a 1923 Mercedes Targa Florio, 1939 Shah Bugatti and a 1966 GT 40 that won the legendary 24 Hours of Le Mans race.

Bodell said the most important thing is that people enjoy themselves at the museum, and he hopes they learn something new and leave with memories that last a lifetime. He added that with ever-changing exhibits, new vehicles and unique experiences, there will always be something new for hardcore automobile enthusiasts, returning guests and first-time visitors. 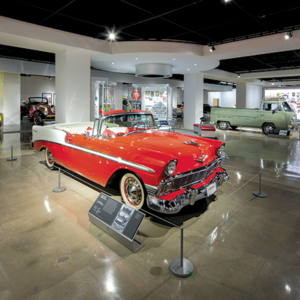 “People were initially reluctant about the exterior design but fell in love with it. Every time we rotate the exhibits, we see a spike in attendance,” said Bodell, who added that the future also looks bright with the opening of the Purple Line Extension subway project in 2023. “As soon as the Metro opens, we are going to have a lot more foot traffic. This whole area is changing, and we are really excited.”