An LAPD SWAT team removed 66 people, including four juveniles, who were allegedly trespassing in a vacant four-story commercial building at the southeast corner of Hollywood Boulevard and Cosmo Street early Wednesday in an operation that closed the boulevard leading up to the morning rush hour. 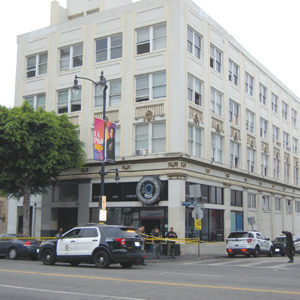 Police removed 66 people who were allegedly trespassing in a vacant building on Hollywood Boulevard during a raid on Sept. 12. (photo by Edwin Folven)

LAPD spokesman Ray Brown said officers served a search warrant at approximately 3 a.m. at the building between Cahuenga Boulevard and Ivar Avenue. The operation was the culmination of two months of investigations into numerous people illegally staying in the building, allegedly selling drugs and possessing firearms. The SWAT Team was involved to ensure safety. No injuries were reported.

The people removed were cited for trespassing. Some arrests may have been made but none were announced. Some of the people were released and others were taken to an undisclosed location for further investigation. Police had to search a large number of people and determine whether any may have been involved with more serious crimes, said Officer Tony Im. Police found firearms and drugs in the building.

“A lot of people at the scene were cited but the investigation is going to take a long, long time,” Im said. “We have a lot of people to look at for a lot of stuff.”