Of all the shows Pat Vegas has played in nearly 50 years as singer and bassist of Native American rock band Redbone, the group’s gig next month will commemorate a moment he’s been waiting for.

To celebrate the city of Los Angeles’ first Indigenous Peoples Day, Redbone will play a grand finale concert on Oct. 8, concluding a daylong series of events at City Hall and Grand Park.

“We’re going to rock this house,” said Vegas, who started Redbone in Los Angeles with his brother Lolly. “We’ve got a whole group put together with some great musicians and great dancers, and backup singers. I’m going to have all my cousins, my son-in-law, my mother, everyone up there singing.”

From 7 a.m. to 7 p.m., there will be a sunrise ceremony, 5K run, parade of nations, Native American powwow, panel sessions on Native American-related topics and a fashion show.

O’Farrell, a member of the Wyandotte Nation, introduced a motion to the City Council in 2015 that culminated in an August 2017 vote to replace Columbus Day with Indigenous Peoples Day on the municipal calendar each year on the second Monday in October. 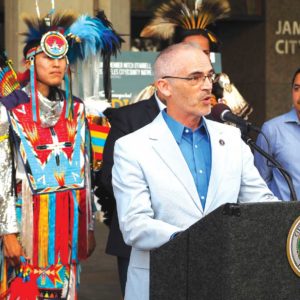 Leading up to the City Council’s vote last year, defenders of Columbus Day said that Christopher Columbus represents thousands of immigrants who have come to America seeking a better life. But its detractors said Columbus’ brutality toward the native inhabitants of the western lands he reached has been overlooked in this country for too long.

Councilman Joe Buscaino, 15th District, who is of Italian descent, was the lone vote against replacing Columbus Day. Although, in an attempt to make both sides happy, he asked council members last year to leave Columbus Day as it as and add an Indigenous Peoples Day on Aug. 9, to coincide with the United Nations’ International Day of the World’s Indigenous People. Council voted 11-4 against that idea, and instead made Oct. 12 Italian American Heritage Day. Columbus Day is still a federal holiday.

“The dominoes are falling as cities and states across the country are eliminating Columbus Day and replacing it with Indigenous Peoples Day, righteously so,” O’Farrell said.

“Send us your flag,” he said. “Send it to Mitch O’Farrell’s office so we can display it with honor and privilege and glory.”

Muralists Levi Ponce and Votan Henriquez will use “live art” to pay homage to their ancestors, heritage and the city’s new October tradition.

“I want to use this opportunity on Oct. 8 to encourage people to stop and think,” Henriquez said. “I want people to take a moment, and think about where they’re standing, and who walked this land before them. Think about where we’ve been, and where we are today. As we participate in the celebration, we must be mindful of the genocide of our ancestors.”