Los Angeles will become the largest city to ban the manufacture and sale of fur products, following a unanimous vote by the City Council on Sept. 18. 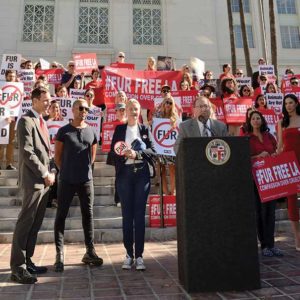 “We want to make sure that everyone knows Los Angeles can and should be the largest city in America to take a stand against the inhumane and appalling treatment of animals,” Councilman Bob Blumenfield, 3rd District, said.

The councilman said he’s not a fashion icon, but high-end brands including Burberry, Gucci and Michael Kors have also joined the movement against fur products. The cities of West Hollywood, Berkeley and San Francisco have passed similar laws.

The ordinance lists handbags, shoes, hats, earmuffs, jewelry and keychains among the common fur products that would be prohibited.

“There is no reason to wear fur in 2018, certainly not in sunny Los Angeles,” said Blumenfield, adding that faux fur is a widely available alternative.

He also said that “when the second largest city in the nation takes these actions, it reverberates.”

Blumenfield and Councilman Paul Koretz, 5th District, authored a motion to draft a law prohibiting the sale and manufacture of fur products in June, seconded by Councilman Mitch O’Farrell, 13th District. More than 85,000 people as of Tuesday had signed a Change.org petition urging Los Angeles to pass the law.

Blumenfield said that Council President Herb Wesson wouldn’t allow him to show a graphic video in council chambers showing the conditions that animals used for fur are subject to.

“These living beings are tortured before being brutally murdered and skinned, or worse yet skinned while still alive, and if it’s something we wouldn’t do to our beloved pets it’s surely something we should not allow to be done to animals who were born less fortunate than the cats and dogs we treat as part of our families,” Los Angeles resident Justin Nicola said in an email to City Hall.

Koretz called the fur ban “an issue whose time has definitely come.”

“There’s nothing humane about raising an animal in terrible conditions just to kill it for unnecessary vanity,” he said.

Blumenfield and Koretz’s motion cites a letter to British Parliament by 50 veterinarians and animal experts who denounce the fur trade.

“Wild animals on fur farms live their lives in wire-floored cages thousands of times smaller than the natural territories,” the letter stated. “They are denied their biological inheritance to exhibit natural behaviors and stimuli such as hunting, digging and swimming.”

L.A.’s ordinance asks the city attorney to report on whether its fur ban should make the same exception, in addition to possible exemptions for religious organizations and to determine methods for certifying the origin of faux fur.

Councilmen Joe Buscaino, Mitchell Englander and Marqueece Harris-Dawson were absent for the 12-0 vote. Supporters of the ban, who gathered outside City Hall for a news conference before the meeting started, waved signs and cheered as the vote was announced.

O’Farrell said the city could no longer “stand idly by when we have an opportunity to do something about it.” Council members said they hope other cities throughout world take note and adopt their own fur bans.

“It’s time to break the chain of inhumane treatment for all animals,” O’Farrell said.