The Los Angeles City Council approved a set of regulations for electric scooter companies during its Sept. 4 meeting. 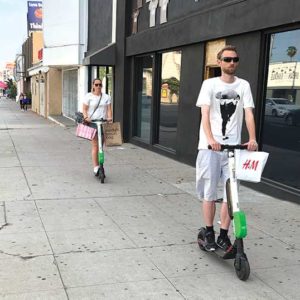 Local leaders throughout the county have been worried about the safety risks posed by electric scooters in the months since they’ve been in use. (photo by Luke Harold)

“We have to continue to embrace multimodal transportation that is efficient, that is emissions-free and is affordable,” Councilman Joe Buscaino, 15th District, said.

Residents have taken issue with the safety concerns the scooters, which users access with a smartphone app, have presented. Lime and Bird, the two companies behind the ubiquitous devices, advise riders not to ride on sidewalks, but many of them do anyway. Both companies offer free helmets, but most riders don’t wear any protection. The scooters can reach 15 mph, and pedestrians throughout the city have said they’ve narrowly avoided collisions with riders.

Representatives from Lime and Bird spoke during public comment, saying they’d continue to work with the city of Los Angeles on safety measures and other regulations. The Los Angeles Department of Transportation and the bureaus of Street Services and Sanitation will be monitoring the pilot program and collecting data to refine the city’s enforcement efforts.

“These rules are not perfect or final and they are going to need tweaking throughout the course of this pilot,” Councilman David Ryu, 4th District, said. “But they are also a springboard.”

Los Angeles nearly became the latest city to institute a ban on electric scooters after a motion by Councilman Paul Koretz, 5th District, in July. Koretz was absent during the council’s Sept. 4 meeting. As a member of the Transportation Committee, Koretz voted in favor of establishing regulations for existing electric scooter usage in June. But last month, upon issuing his motion, he called that vote “premature.” Over the summer, the councilman said he’s seen hundreds of riders illegally riding on the sidewalks, not wearing helmets and in some cases two or three riders on one scooter.

The Santa Monica City Council voted in June to start a 16-month pilot program that allows for continued usage of electric scooters. Culver City has agreed to allow Bird and Lime to operate within the city for a six-month trial period as the city collects data and feedback for a long-term plan.

Councilman Mike Bonin, 11th District, has long supported improved transportation options, and the scooters have been especially popular in his district, which includes Venice Beach.

“We need smart regulations for dockless scooters, not a total ban,” Bonin said in a statement last month. “Scooters are a popular, convenient zero emission form of transportation. If we are serious about combatting climate change, cutting emissions, or reducing gridlock, we need to put our mobility where our mouth is.”

Council District 4 chief of staff decides to 'pass the torch'