How does your garden grow? Parkway Grill plowed the field for restaurant gardens

Nearly 30 years ago, Gregg Smith looked at a notice from the city of Pasadena about his property behind the restaurant, telling him to “clean it up.” 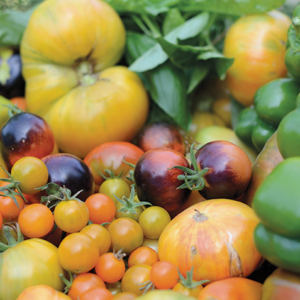 Heirloom tomatoes are grown in the garden. (photo courtesy of the Parkway Grill)

What was a nuisance to him – and apparently the city – suddenly became a priority. Then, a lightbulb went off – what if he planted a vegetable garden where his chefs could harvest fresh produce literally in their backyard?

His partners shrugged their shoulders at the idea and thought the benefit would not outweigh the cost. But Smith forged ahead anyway, having a vision for something fruitful. He brought in loads of new soil and invested in a large variety of fruits and vegetables.

A few months later, Los Angeles Times writer Daniel Puzo’s story in the “View” section of the Sunday paper was published, and suddenly the garden’s “return on investment,” as the partners fretted about, went through the roof. Metropolitan dailies in Denver and Dallas picked up the story and suddenly the popular local restaurant had national attention. The restaurant grew even more popular, not just among Pasadeneans, but diners throughout Los Angeles.

This may not sound like such a novel idea – many restaurants now have their own gardens from which to pick vegetables. But 28 years ago, it was a very novel idea and Parkway Grill was the first to plant and successfully harvest the fruits of their labor. 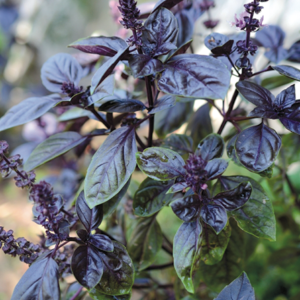 I had the pleasure of touring the garden with Smith, as he proudly pointed out several varieties of heirloom tomatoes, peppers, passion fruit and herbs.

A full replanting was completed in July with a fall bounty expected any day. The head gardener, Ruben, planted green zebra tomatoes, heirloom bi-color tomatoes, orange sweet bell peppers, Italian violet eggplant, rainbow carrots and red baron beets. What a shock of color these beauties will produce, and they are 100 percent certified organic.

To accent and spice dishes, the chefs will be able to select herbs like sweet marjoram, dark opal basil, Thai lemongrass, Italian parsley and oregano.

During a recent awards ceremony recognizing Smith and the garden, the buzz phrase “farm to table” was mentioned.

“What’s all this fuss about farm to table? Isn’t everything grown on a farm?” Smith quipped. “We’re not just farm to table – we’re backyard to table!”

The garden provides produce for the evening specials, but the restaurant relies on outside deliveries to supply the kitchen with enough fresh fruits and vegetables to prepare all the dishes on the innovative, American cuisine menu.

Currently, a light and refreshing lobster salad is a best seller: Maine lobster with with Manila mango, green beans and lemongrass. 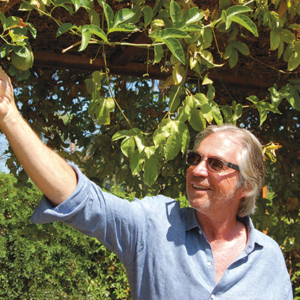 I’ve personally known this restaurant for 30 years. My husband and I had one of our first dates here. It opened in 1984 and has adapted over the years to reflect current dining trends and styles. One of my favorite dishes is the whole catfish – flash fried with slices of ginger and topped with fresh cilantro and a crunchy slaw. It is an entrée, but we like to share it around a table of four for a first course. Grab your chopsticks and dive in!

Tiger shrimp corndogs – served on the stick – come with a pungent Thai cocktail sauce. Shrimp linguine in a lemony sauce with arugula is simple yet elegant. Steaks, chops and fish preparations rotate seasonally, with heartier variations in the fall.

A stellar wine list, personally developed by Smith over the years, offers bottles from famous wineries and vineyards, with an eclectic variety of small batch growers too. Smith recalls the early days where he had to “prove the restaurant’s value” to winemakers. He’d travel to Napa Valley and show them his menu to convince them his restaurant was of the right caliber. How things have changed. Smith has curated a wine list of more than 400 bottles and an inventory of 3,870. With prices ranging from $30-$750, wine drinkers will certainly find a selection that suits them. Awarded each year in August, Wine Spectator recognizes restaurants for their outstanding wine lists, taking 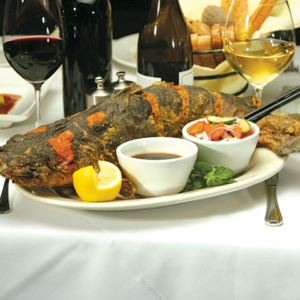 Flash-fried catfish with ginger. (photo courtesy of the Parkway Grill)

into consideration: variety, pairing with food, wine storage and presentation. Parkway Grill has received an award from Wine Spectator annually since 1999.

For more than 34 years, the Parkway Grill has been a top-rated restaurant in Pasadena. I would say their garden – and business – has grown quite abundantly. 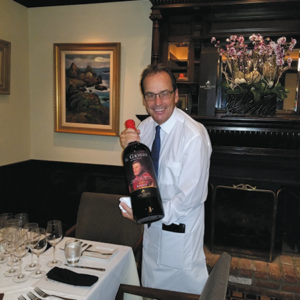 Ronald Brown has been a headwaiter at Parkway Grill for 20 years. His service and professionalism are first class. And he can tell a good joke or two.

What is your favorite dish on the menu?

I always steer guests to the specials, but the flash-fried catfish is probably my favorite dish. I also like our flatbreads that rotate, and the crème brûlée Napolean is my favorite dessert.

How much influence do you have on the menu? Does the chef ask for your feedback?

The waitstaff tastes the nightly specials and asks for our opinions on each dish.

Where do you go when you dine out?

My girlfriend and I enjoy going out – everything from a food truck to a fine dining restaurant. I also love to barbecue, so I spend many of my days off firing up the grill.

Where do you get your joke material?

The golf course, of course!