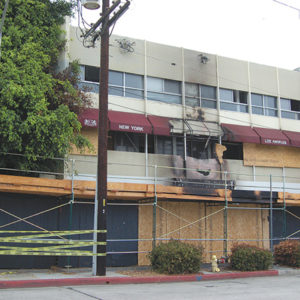 A fire damaged the front of a vacant building on Melrose Avenue just east of Doheny Drive in West Hollywood. (photo by Edwin Folven)

Firefighters in West Hollywood quickly extinguished a blaze on Sept. 2 that damaged the façade of a building under construction at 9013 Melrose Ave.

Los Angeles County Fire Department Inspector Joey Marron said authorities received a 911 call about the blaze at approximately 3:12 a.m. Firefighters arrived to find flames and smoke coming from the front of the building, located just east of Doheny Drive. The flames were extinguished approximately 10 minutes later. The cause remains under investigation and there was no estimate of damage or loss.